Your power users are your most important assets

Users are the most important factor in the success of any mobile app. However, not all users can be listed in a single category. The term ‘user base’ is a broad term and often confuses mobile app marketing campaigners. If you want your app to be successful, you need to understand the different categories of app users and the role they play in the success of your mobile app.

CATEGORIZING THE USER BASE IN THE RIGHT WAY

Who are the power users?

If you are looking for a simple definition, you can say that the users who spend more time exploring your app are the power users. They regularly log in your app, check for new information or try different features provided in your app. Power users are always trying to discover something new and get the latest info about your app. They use every feature available in your app and know your app forward and backward.

In simple words, they are real-life knowledge databases of your app. They know more about your app than the average user and may also know a lot more than you.

Did you know that the power users, generally a smaller part of your larger user base, generate the majority of the revenue for your app? Revenue is not the only reason that makes power users important. They can provide you insights that can help you convert occasional users or average users into power users thus increasing your revenue opportunities simultaneously.

How to identify power users?

Identifying power users is easy. Here are some common guidelines and tips to identify them: 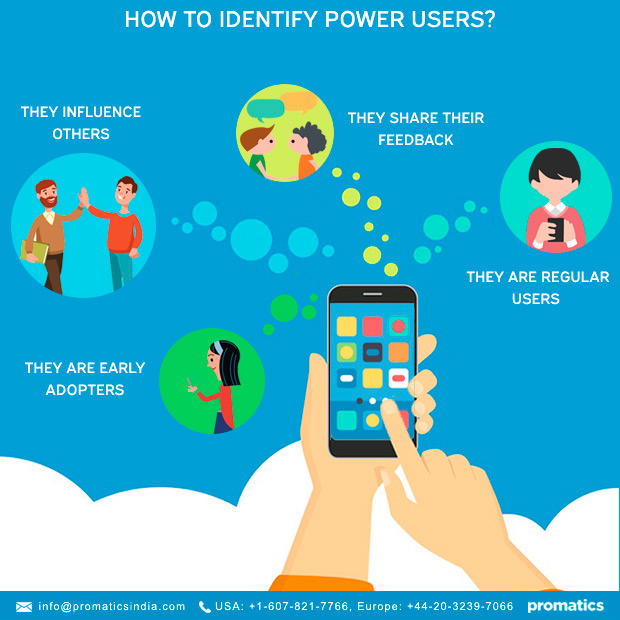 Power users leave well-thought comments and feedback for your app, and it has credibility and value by their followers or other users on the platforms. These influential people have a credible background that establishes them as authority people (masters of the subject) talking about a particular subject. Other users trust what they say and listen to them.

They are early adopters

It is a common trend to launch MVPs (Minimum Viable Product) to test the app in the market. The basic version of the app is downloaded by the power users and they don’t download it just because it is new and it’s available to download. They download the app and use it consistently and provide you regular feedback and comments by playing an important role in mobile app development.

There is a lot to learn from power users and you need to adopt surefire ways to find them and learn from them by observing how they use your app. Once you have found them, you need to give them VIP treatment to ensure they always stay with your app.

How to care for power users?

Rather than bombarding irrelevant messages or offers, you need to dedicate your efforts to boost their loyalty by offering personalized content, incentives and rewards. Learning from the offline marketing ways, leave no stone unturned to deliver the best possible experience to your power users.

You need to make every effort to reach identified power users when they achieve milestones. For example, send them personalized messages that show you appreciate their dedication towards your app and offer them recognition by making them part of your app promotions. After all, who doesn’t like appreciation or recognition?

You need to keep a tab on power users from a learning point of view and know the issues or things that frustrate them. Just like power users are fountains of knowledge they are also canaries in coal mines. If you see power users losing interest or their active participation decreasing, find out what is wrong ASAP. Always work with your power users closely and let them know they are valuable to you and you are always ready to find answers to their needs.

Here are the three advantages that you can get from identifying and taking care of power users:

Customer acquisition is an important factor for the growth of an app and it costs money. Spending your money on acquiring new users and losing the current ones is a faulty strategy. The solution to this problem is using the insights gained from the power users to increase engagement of average users by improving product value proposition, driving growth, increasing retention and more. The information collected from insights can be used to target already existing users who have a considerable lifetime value for your app.

Power users can also help you identify best platforms for user acquisition at lower costs. Although you will gain a lower number of new users on these platforms, the user acquisition rate and the lifetime value of these newly added users will be significantly higher than other platforms. When you use power user’s insights to reach a new user base, you put your efforts on the optimum path to reach the right people. Instead of adding new users with a focus on revenue generation, it is always safe and fruitful to gain users who will deliver the results over the time. In these scenario, the rate of success is higher in comparison to other user acquisition strategies.

2. Utilize their power of appreciation

Power users are vocal and like to give feedback, or complaints that can help you improve the app. Testimonials are great to attract new users and Google values such conversations. Power users are not only knowledge troves, but are also hugely interested in the app you have built.

Some power user may also feel your app is part of their identity. By appreciating their opinions, feedback and responding to their complaints in the right way, you give power users something back for their interest and hard work. You can provide those incentives for their hard work and as the word spreads, more average users/occasional user will see the benefits of becoming a power user adding to the count. Ask power users to share their stories from social media platforms and they will be happy to spread the word about your app. All this will bring in more recognition and help you tap new user sources that are influenced and have benefited from power users knowledge. 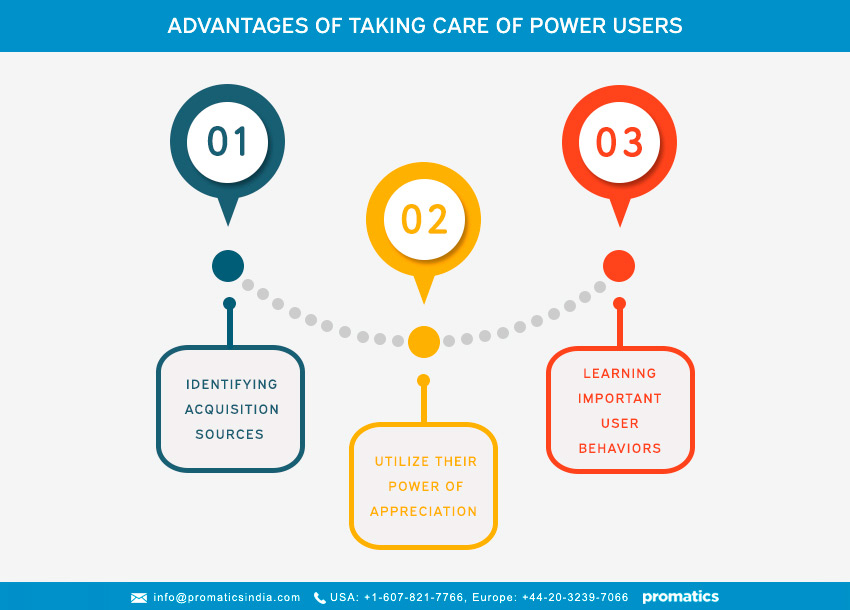 Learning about power users behavior is worth the effort as you are able to learn what behaviors are necessary to encourage for average or new users. By encouraging right behaviors in app users, you will be able to put them on the same path that converts them to power users. For example, if you have a travel app and have a group of people joining a loyalty club, you can send them notifications about short or long haul flight deals that put them on a path to higher lifetime value.

Top mobile app development companies always lay stress on identifying and taking care of power users. By building a strong base of power users, you build valuable and reliable connections that have the power to influence others.

Besides spreading the good word about your app and helping you learn about shortcomings, the power users also generate good revenue for the app that helps you meet ongoing development costs. A strong base of power users will also ensure your brand stays strong all the way.