Why Node.js is considered a rising star in the web app development space? 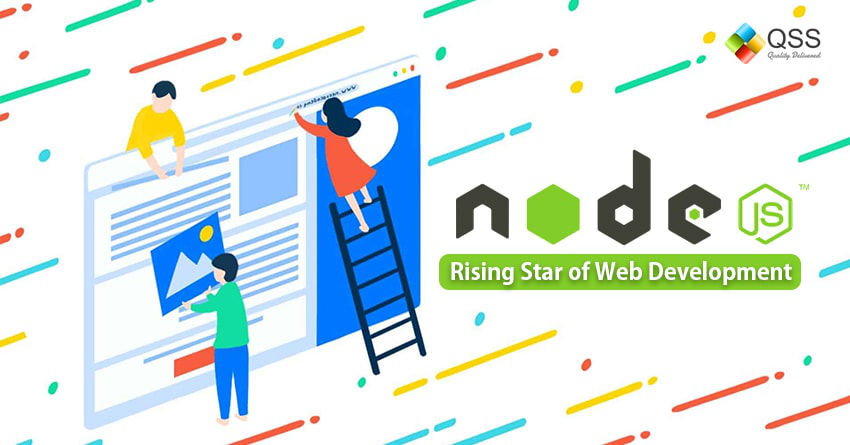 JavaScript is not only considered to be one of the most widely-held programming languages but also the ubiquitous software application development framework. Traditionally, it was used for the development of the web application frontend but eventually has become the mainstream cross-platform mobile app development framework as a technology for a diverse range of platforms including Apache Cordova or Phone Gap, React Native, Native Script, Appcelerator and Titanium.

However, the scope of application for JavaScript is not confined to this level. Recently, there has been a lot of hoopla around the implementation of JavaScript for the creation of server-side programming. One of the gears that have ushered in this revolution in web development space was Node.js.

Technically speaking, Node.js app development is not a framework or a library but a runtime environment built on Chrome’s V8 JavaScript engine. For the very first time, the technology was released back in 2009 by Ryan Dahl at the annual European JSConf. It was later introduced as an open-source venture funded by Joyent (a cloud computing and hosting service provider).

Some of the popular names in the corporate world that made use of the next-generation Node.Js are:

Though, it wasn’t up until lately that an extensive embracing of server-side JavaScript with Node.js triggered. The curiosity in this technology spiked in the year 2014, as per Google Trends, and continues to stay in the top position till date.

Some of the key advantages of using Node.js:

Over a decade time, JavaScript has undoubtedly become a strong contender among the most popularly used programming languages. Consecutively, Node.js has gained a strong grip over the industry with an overall 368,985,988 of downloads and more than 750 new sponsors as projected by the Node-by-numbers report 2018, which means this programming language of server-side development is becoming stronger than ever. 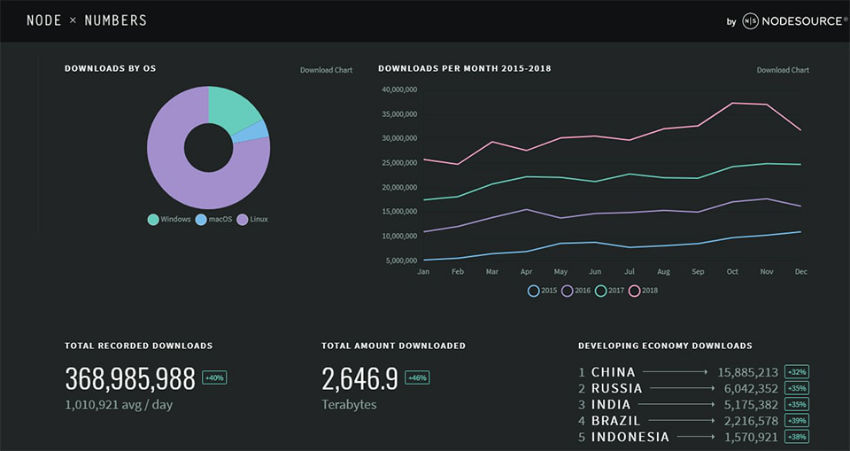 Node.Js development company in India mainly make use of this technology for backend development to leverage the benefits of full stack JavaScript development, mainly including:

When you hire node.js developers, you will get the fast and unswerving software without compromising on the speed and performance. The professional developers are well-versed with frontend JavaScript can immediately initiate the server-side programming. With the application of a single language, developers basically reuse the code on the frontend and the backend by enveloping it into components and forming new levels of propositions.

Regardless of the fact, with full stack web development, developers are not confined to customary MEAN (MongoDB, Express.js, AngularJS, and Node.js) stack. The only significant thing in this scenario is the use of Node.js (no substitute is available in JavaScript for backend programming). The remaining technologies inside this stack are elective and may be swapped with some other gears offering comparable functionality.

There is no denying the fact that Node.js is lightning fast. The main reason why Node.js is considered superfast is a V8 engine and non-blocking Input/output and asynchronous request management feature.

Chrome V8 engine: Technically speaking, the engine put to use during the deployment of Node.js was actually created for the Chrome browser. Chrome’s V8, written with the use of C++, is used to collate operations written in JavaScript into machine-based code. It is known to do the same at an incredible speed. Just have a look at the performance benchmarks of Chrome’s V8:

In the above graph, V8 is demonstrating fantabulous performance enhancements every year, and Node.js draws out a whole bunch of advantages from it.

This feature of Node.js equipped it with the power of processing each and every request without much delay. When it comes to backend development, synchronous processing concludes that code is implemented in a progression. Thus, every single request tends to impede a thread thereby putting other requests in a queue to wait until the processing of the request isn’t finished.

On the flip side, the asynchronous processing permits the processing of more number of requests without even thwarting (non-blocking I/O) thread. Once the request has been completed, there are chances that it can drive out a callback and carry on attending incoming requests. This further enables the Node.js technology to capitalize on every single threading, leading to abridged reply time and synchronized processing.

Now, let’s try to understand the event-driven model. When a single programming language is used for both client/server-side, reconsolidation transpires real fast, which is principally beneficial for event-driven and real-time apps. As a result of the asynchronous, non-blocking, and single-threaded attributes of Node.js, it has definitely become the most anticipated preference majorly for online games, chats, video seminars, or any other related solutions in which data is consistently updated.

Many leading names in the industry swapped their existing technologies to Node.js applications and experienced substantial improvements. For instance, PayPal reported having around 35% drops in response time after they migrated from Java.

As Node.js is a feather-light technology, it is considered to be the most suitable architecture for the Microservices. It is basically described as a method put into practice to build a single app into a pool of small services, which is independently operating in their own process and connecting with the feather-light weight tools, an HTTP based API. Basically, the application logic is fragmented further into small components (Microservices) rather than creating a single massive core. This way you will be able to lay a better underpinning for future expansion. Thus, it is much simpler to incorporate more microservices in addition to the prevailing ones, instead of integrating supplementary features with the rudimentary app functionality.

Node.Js development company in India make use of this technology for developing and seamlessly integrating microservices solutions. As per the survey conducted by Docker, it has been revealed that approximately50% of the respondents are making use of the microservice-based technologies in order to create Node.js web applications. Walmart has lately known to make a big switch to microservices architecture with the use of the Node.js and you will be amazed to know the instant benefits of making such a business-critical decision. Just have a look at the benefits below:

Another good example of how Node.js is outshining in the highly competitive digital market in terms of performance is the illustration of GoDaddy. While running the ad campaign for the SuperBowl, the company did effectively handle the influx of around 10,000 users’ requests per seconds without facing any downtime simply by using around 10% of the hardware and all the credit of this goes to none other than Node.js.

Npm, which is a default Node.js package manager and open source JavaScript tools, plays a pivotal role in the development of this technology. With about 836,000 libraries readily accessible in the NPM registry up until now, and over 10,000 fresh ones being released every week, the Node.js environment is considered to be quite rich. As per the estimates, around 97% of today’s web applications are made up of NPM components, which clearly indicate the increasing demand of Node.js.

Node.js has undoubtedly made JavaScript a full-stack technology option for server-side application development. Thanks to its non-blocking architecture, Node.js does well for encrypting and dissemination video and audio, uploading numerous files, and data streaming. Node.js is the right technology for data-intensive, real-time IoT devices and applications. If you are thinking about making most of this fast and highly scalable technology, then look for a trusted node.js development company in India.

Sanjay Pandey is one of the founder at QSS Technosoft who started the company in 2010. He has been a coder for many years and has worked on multiple web and mobile technologies, before jumping into the sales. Sanjay has a keen interest in the latest ...