Every new app business gets caught up in a bunch of crucial decisions about the choice of mobile technologies they intend to use for the app project. Driven by a quest to create avant-garde digital experiences for the users, they aggressively access various mobile app technologies. We have seen Native Android and iOS apps gain unparalleled popularity in the past for the benefits they offer. However, recently the practice of developing Native Apps for Android and iOS is facing strong competition from the ones developed for both using a single codebase: Cross-Platform. However, developing an engaging cross-platform app can be an uphill task for many app developers. Very often cross-platform apps lack in terms of UX when compared to native apps, even after the developer's best efforts. A number of mobile frameworks like React Native, Xamarin and Angular are an app developer’s favorite for their prolific assistance in creating attractive digital experiences.

An emerging framework posing next level competition to the Native approach is Flutter. Google’s Flutter is a new addition to the list of frameworks. Flutter has acquired the position of 34th most popular software repo in GitHub.

Our team at Promatics Technologies has worked with Flutter enough to know the pros and cons it offers to an app developer. In this article, we intend to share the knowledge from our experiences with fellow app developers.

What looks like an amalgam of various Google technologies and concepts, is, in reality, a powerful mobile framework called Flutter. Built up on Google's in house programming language Dart, Flutter enjoys access to the Skia graphics library which Chrome uses. It works in association with Google’s Material Design specifications.

Last year in 2018, Google made Flutter come out of its Beta stage. It was then allowed to enter the market as Flutter 1.0 for developers to work around. Distinct functionalities of Flutter, constant efforts from the Google team, ever-growing flutter community are all contributing towards making the flutter framework issue free and scalable. Flutter’s developer community has already eliminated 9000 issues to date. Issues like random disconnection of the debugger, crashing of the app with no obvious reasons have been resolved with the help from industry experts. From March 2019, Flutter is inviting mobile app developers to use it in low complexity apps and prototyping, without any high complexity issues. It is only a few rungs away from being enterprises and startups’ favorite.

There are plenty of reasons why you must choose Flutter as your development environment. Take a look at a few:

I. Overcomes traditional limitations of cross-platform

Choosing to build an app with the cross-platform approach requires developers to build multiple versions of an identical product. In most cases, a cross-platform app lacks in terms of user experience when compared to native applications. This is because in the case of cross-platform app UI is built with JavaScript and is time-consuming, to say the least. Opting Flutter, allows a developer to write the code once and achieve high performance, “native” experience. Flutter App is an Ahead Of Time compiled, machine binary executable.

Flutter’s “hot reload” or “Hot Restart” increases an app developers productivity manifold. The feature allows developers to see changes they make to the state of an app in less than one second. Further, the changes to the app structure are reflected in less than ten seconds. Flutter allows modifications in real time. While a Flutter calls for a Gradle build at the beginning of the development the first time around, it does not require it again for a complete app restart. In the case of Android apps, developers struggle with gradle rebuild times that make modifications time-consuming. iOS apps, on the other hand, are developed natively and need to be rebuilt from scratch for changes to reflect on the simulator. Dependency management program of iOS native apps adversely affects productivity. Flutter resorts to its personal dependency management tool called Pub. The prebuilt dependency handling system inside the Flutter apps makes it extremely easy to get new dependencies as and when needed. From a developer’s perspective,  there’s little or no learning curve. Thus, development time is often reduced by 30–40%.

III. Sorting frontend and backend with a single code

Dart is a programming language that has been built on the most popular features of other languages without losing the familiarity of Java or similar languages. Dart has strategically inculcated the best of features of a number of different languages, without sliding the much-needed sense of Java familiarity – something that makes the whole development process almost effortless for the developers and profitable for the businesses who choose to invest in a Flutter app development company. It is easy to use for developers and makes performing tasks much easier. While there are separate files for frontend (Views) which are referenced by backend (Java) in Android development, Flutter uses a single language I.e Dart which does both the job and uses a reactive framework.

Everything is a widget on flutter. Be it ‘texts’, ‘buttons’ or even ‘screen layouts’, it is all in the form of pixel-perfect widgets on Flutter. These widgets arrange themselves in a hierarchical order on a Flutter app. Sometimes, these widgets hold inside them other widgets as well. These widgets make the UIKit of Flutter a uniform experience for users of all sorts of platforms. An architecture characterized primarily by widgets makes it clear where certain attributes and behavior applied to a portion of an app are coming from. This is a prime reason why Android and iOS app developers must consider Flutter.

V. Can be used to make apps for mobile, desktop and the web

Don't be surprised by reading this unique perk. It's true that the Flutter team has introduced a prototype Flutter app that works in a web browser. This means using Flutter framework will allow developers to use a single code for developing apps for mobile, desktop and the web easily. 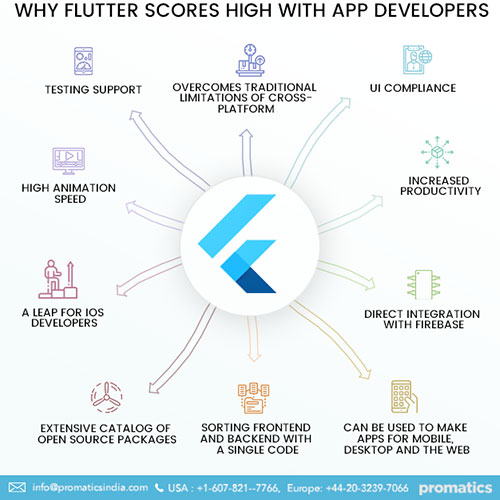 Firebase extends extraordinary support for a collection of services such as cloud storage, cloud functions, real-time databases, hosting, authentication and much more. This saves you a lot of time and resources that go into building the backend. It is still easier to combine it with a tool for automating your development and release process like Fastlane; facilitating Continuous Delivery.

XCTest is the native testing framework for Apple. It accesses integration, performance, and the UI testing of the iOS apps. It has numerous elements like a grouping of the test, data-driven testing, snapshots test, etc. It is common for developers to face issues with the XCTest framework. Frequent XCTest framework users fall prey to its shortcomings like mocking and stubbing. On the other hand, Flutter offers a rock-solid test framework. This framework allows developers to write test at a functional, unit, and UI level. It supports detailed documentation with example codes, on the process that has to be followed to test apps at different levels.

A large set of open source packages available online helps you create apps at a fast pace, easily. These pre-curated packages make many complicated tasks easier than they already are. This package library is relatively very young and is growing by leaps and bounds through active contributions of developers to Flutter.

With Flutter, it is fairly simple to use animation pattern in mobile apps. Talking of Android apps, developers can load animation at a speed of 60FP. Animations are even easier using 2 Dimensions Flare.

X. A leap for iOS developers

Most iPhone app developers avoid investing their time in cross-platform app development. Technical tools used to develop two apps from a single code base, often deliver a final iOS product that doesn't match up the quality criteria. Moreover, most iOS developers believe that Swift is the best tools to work on and thus avoid turning to work on a cross-platform. However, with Flutter, it is difficult to differentiate between its product and a Native app. It offers an app development solution that matches up the smoothness, slickness of a native app. All this makes Flutter an ideal choice for iOS developers.

Our stint with Flutter apps has allowed us deeper insights into its working. We believe that Apps where UI accounts for a large proportion of the work, benefit more from Flutter. In comparison, apps which requires a lot of device-oriented functions benefit much less. Further, it's not very confident to incorporate the framework into the existing application. Flutter framework allows you to transition to the platform native screen. The Flutter team has carefully implemented Material design specification that allows developers to create powerful UI experiences in an app. The apps developed with Flutter are as smooth in terms of functioning as a native application. The framework also features widgets that implement the Human Interface Design specifications for iOS, ensuring that native “feel” on iPhone and iPad as well.

It would be right to say that Flutter is going to be a blessing in disguise for any progressive mobile app development company. It overcomes many of the pain points faced by mobile app startups trying to release on multiple platforms. It saves them time and budget to get the software product to market.

KRA: Measuring Employee Performance and Organization's Development
Know When to Update Your App

What Are the Steps to Develop an Android App