Why and how to make your app work offline 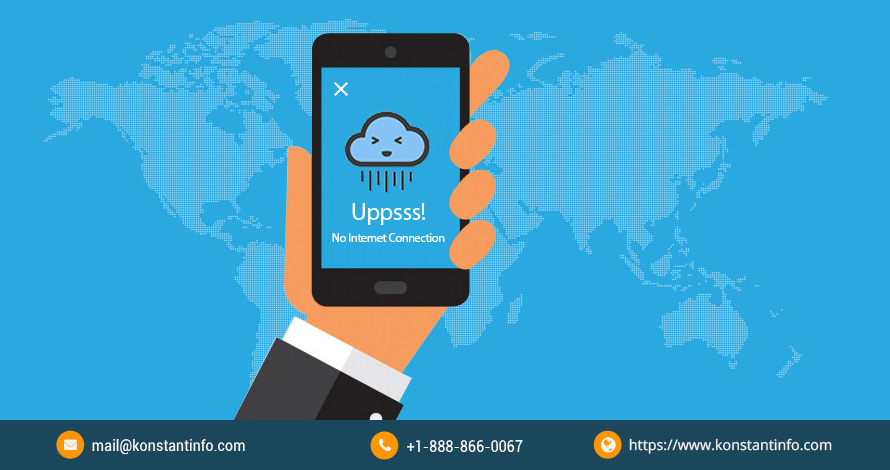 How would you feel if Facebook or Twitter didn’t allow you to write/send a new post when you had a low internet connectivity? Bad, very bad!!

Because a complete refusal always leads to a distressing user experience. Rather, you would be happier if it says “You can still post while you are offline” or “When you have a stronger Internet connection, we’ll automatically post this for you”. This is why Facebook is your favorite social media app because it never disappoints you, irrespective of the signal strength of mobile/Wi-Fi connection. And this is exactly what your users expect from your mobile app.

When you’re simplifying users’ lives and providing entertainment to your audience with the help of a mobile app, don’t you think it’s important to make an effort to serve your customers when they don’t have a perfectly-working internet connection. Indeed, it is.

In today’s time, mobile applications are the front-runner for most B2B and B2C business. We are fortunate to have an incessant internet connection, but there may be times when we are at lone places, abandoned lands, remote sites, underground by subway where we have no network on our phone. In that case, are we completely disconnected from the world? Absolutely not, this is the time when we need an app that works offline.

WHAT ARE OFFLINE APPS?

To be precise and specific, when we say the app works offline, it means that the app can survive the downtime and can be resumed from the same point where we left as the connection was lost. For instance, messaging apps like WhatsApp and WeChat allow users to send messages to their contacts who do not have internet connection working at the moment but as soon as they come out of the no-internet zone, they’ll receive the message.

If you’re thinking what’s the benefit then I must remind you that you don’t have to wait to type the message, you can send it as and when you want, which we usually forget after a while.

Chiefly, these apps are intended to sync with the cloud, but can live through the downtime. While at the same time, offline apps need to operate outside the cloud. So, this thing is complex and that’s why we are here to answer many of your doubts for developing an offline application.

So, it’s like, if you’re a reading enthusiast and you’re going to travel for the whole next week and you’re certain to lose internet connection on travel, you can put all your news on your device using Feedly from the FeedMe app when connected to your Wi-Fi. Now, for the next week, you can enjoy reading the articles you’ve saved, regardless of the internet connectivity. You don’t have to waste your time looking for the next Wi-Fi hotspot.

Offline capabilities of an app are transforming the app world into a more reliable and secure environment, which users of all kinds- be it office professionals, homemakers, kids and college teenagers-appreciate. Adding an offline mode to your mobile app means that you try to provide, as much as possible, the same user experience whatever be the network- perfectly working, down, slow or flickering. And this effort of yours will be valued highly by your user base and potential customers.

Though you can’t make an offline app do all what the online app does, you can make it useful.

HOW CAN YOU MAKE YOUR APP WORK OFFLINE?

Now, this is a key challenge for you (as an app owner) and for the mobile app developer. To deal with the discontinuity in user’s mobile network connection, you need to provide smooth synchronization for user’s app updates with the server. So, the three major actions that play a vital role while designing an app for intermittent connections are: synchronization, serialization and conflict resolutions.

All the above can be achieved only if you hire an expert mobile app development company like Konstant Infosolutions because they have the right team and right experience to do it for you. Many offshore development companies in India are now adept in developing offline mobile apps.

Moving further, there are multiple commercial servers and frameworks available on the market that can handle offline data sync. The goal of offline app design is to build an app that can switch offline and online or it to use the app offline majority of the time (like a gaming app). You can choose the following three guiding principles to start with the offline app development:

Here’s how you can proceed:

Initial data synchronization: Whenever an app (that you’ve made offline) works for the first time, it checks if there is any data in the server database. If the data is present, it downloads the data and stores in the local database.

Local data synchronization: To perform the basic CRUD operations, the app interacts with its local database, at this time, a server sync flag can be set. The app then looks for network availability. If the mobile connectivity (over mobile data or Wi-Fi) is found, the app synchronizes the local data to server database using the REST API. If successful, the app updates the server sync flag.

On the other hand, if there is no connectivity or there is a sync failure due to any reason, the app again performs the same process with a background sync service. This continues at regular intervals.

Server data synchronization: Just like the local app update in the above step, when there is a server update, it should be pushed to the local copies. In this case, the server, using FCM/APNS, informs the client, which triggers the synchronization service in the background. Thus, the sync services retrieve all the data (updated) and resolve conflicts if any. The local data is then updated to server values, thereafter.

Conflict resolution: You can choose to resolve conflicts locally using timestamps. Whenever there is a data update, the timestamp is noted down and the sync service ensures that the latest data is updated everywhere.

Later, using the timestamp of the data, the conflicts between local data and server data are resolved. So, now when the local changes are sent to the server, the sync flag, along with the timestamp, gets updated.

It is important to note that no matter what strategy you use in the back end to coordinate the changes, conflicts will arise between two pieces of data. You have to be prepared to resolve this. For instance, if a conflict arises when the user edits in two places simultaneously when they’re offline, then they should get an alert message only when they’re offline.

With advanced technologies and methods, you can now prevent the conflicts to occur, in the first place. It may lead to building an app such that the abnormal data from any source doesn’t lead to a conflict.

As the connection resumes, the app receives a callback from the respective operating system (OS) and the synchronization service is activated.

Offline mobile applications have now gained immense popularity among the app development companies in India and worldwide. If we put ourselves in your shoes and think as an app owner (who was not cognizant with the perks of having an offline mobile app as yet), we might hesitate to take it forward because of the extra time and cost it would incur. But now, since we realize the fringe benefits of offline app development, we really can’t afford to treat our customers with always-online apps but offer them online-offline apps.

Things to consider to develop a small app project
Magento: best e-commerce CMS of all times