What Process Should Be Followed For Mobile App Design? 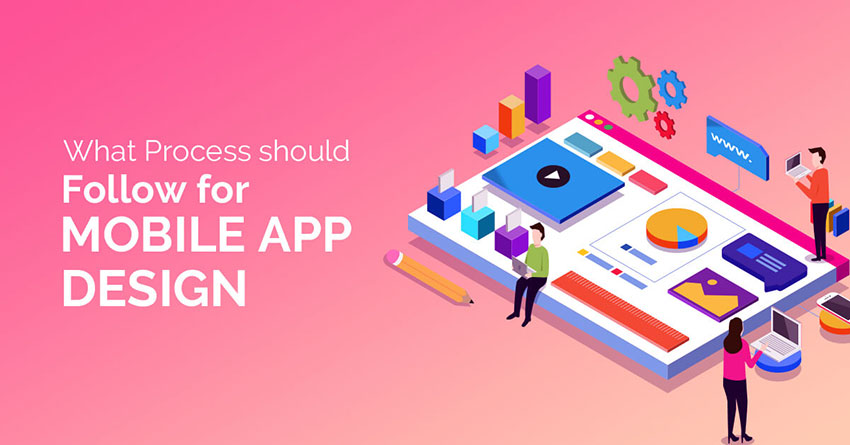 Most companies that have websites are now in the lookout to hire a web designer to design their web and mobile apps. The reason is that smartphones have become the place for most companies to make their presence felt. Primarily because most people are now hooked to apps to get their work done, be it shopping, tracking their health, food habit or even recipes. You name your tasks and there is an app for it. So to make an impact in the market with the mobile app it is important to find a company that helps in developing and designing apps for so that you can gain traction on the Internet and target the audience.

With more apps reaching the market the demand for a mobile app will continue to rise as per the pundits of the market. It has been estimated that by 2017 there were about 268.7 billion mobile app downloads globally. So if you are in a customer-first business, which most businesses are you, will require a mobile app. It is always advisable to go to a professional mobile application development company to develop and design the app, as they know how to get the audience.

Process to Be Followed For Designing Mobile App

If you are a start-up company or new in the field of designing a mobile app the idea of creating a mobile app can be quite daunting, mainly the process of complex coding it involves. But not necessarily it needs to be that way. As a mobile application development company if you can plan every step of how you intend to design the mobile app towards the end of the process you might find it is not that unachievable anymore.

As a customer-oriented business one should be aware that it has been estimated that users spend almost 90 percent of their time going through various apps instead of surfing the Internet.

Hence the trend is now to have an efficient mobile marketing strategy along with a mobile responsive website, which is well integrated with the mobile app. Not having a mobile app can have quite negative repercussions to one’s business. So most organizations are in the mode to hire app developer who should follow these processes when along with the app designers when designing a mobile app.

• Plan The Mobile App Design: This is a collaborative effort in which the designer of the app works in close contact with the client understanding the requirement of the app and the features that need to be integrated into the app. The designer also studies the research that has been conducted to identify the target audience to design the app accordingly.

• Conduct Your Research: A hire app developer who is a professional will conduct detailed research to develop an appropriate strategy for an innovative app. They will also implement strategies recognizing the latest trends in app design to customize the app with trendy and latest features.

• Identify the Target Audience: It is the job of the app designer to undertake the research to identify the target audience for the app. This will determine the functionality, design, and UI of the app. Also, consider the following questions when developing the UI.

Depending on the UI the visual impact of the app is determined too.

- Topography: The first thing that attracts people to an app and stays with them depends on how the app looks. The topography of the app determines the essence of the brand. So the app needs to be designed in a way that is clear, attractive with the right font size.

- Color Schemes: Colors are the salient yet silent features of an app. They have a psychological effect on the user. Hence it is crucial for the designer of the app to develop pleasant contrast between the background and the foreground, the font colors, the pictures. Most reputed designers and developers test various color schemes before zeroing it down.

• Specification: The designer needs to know the specification that the client requires for the app. This will determine the UX of the app and the technologies that will be used for it. All these specifications then the designer will hand over to the mobile app developer.

• Developing Wireframes: This is the process in which both the app designer and developer need to work as a team. They together build the wireframe, which is the skeletal structure of the envisioned app. Most professional and reputed hire web designer will use Adobe XD, Sketch, or Photoshop to construct the wireframes for OS like iOS and Android.

• Building Prototype: This is a crucial part of app designing since it represents the live design of the app as well as showcases how the users will interact with it. The prototype is built by using either InVision or Adobe XD, which is then converted into prototypes for mobile design. Feedback on the prototype is received from the client and then worked on it again implementing the required changes.

• Finishing Touch: The last stage of the app design includes other visuals and animations that the app might require as per the client’s request.

While all these factors are required to be followed by an app designer it is also important that a client selects a mobile app designing and development company that can work across all platforms. To reach the most number of audiences it is crucial that a client focussed business selects both an iPhone app development company as well as an Android app development company. This is mainly because in the last few years there has been a significant rise in the number of iPhone users along with Android users. Partnering with the company, which ensures that the clients meet their requirements in both the OS is crucial so that they can stand out among their competitors and get receive maximum exposure.