Vapor: What is it? New release 3.0.0, what does it mean for iOS Developers? 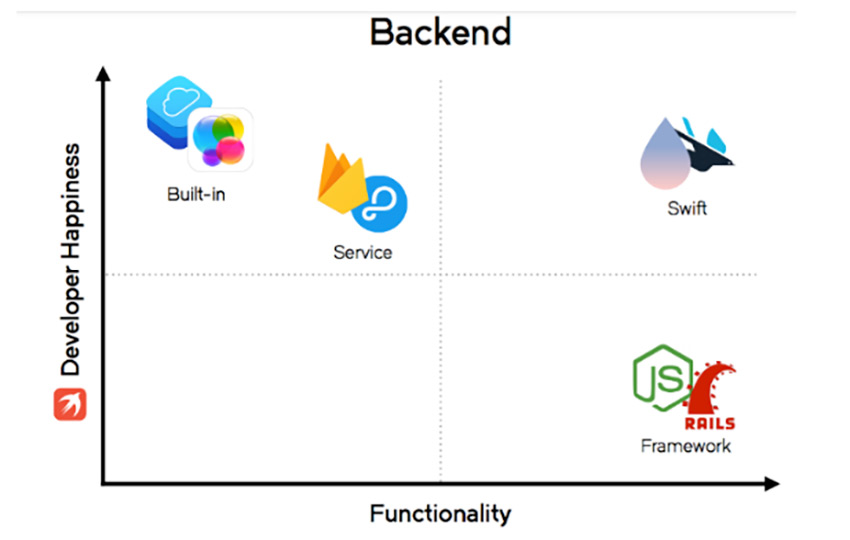 You may consider it a Happiness or productivity vs. Efficiency or Performance graph for backend developers. Swift and Vapor make the best pair in this scenario.

Do you love Vapor already or it’s still a mystery for you?

For both types of developers, entitled in the question above, this article can help. In this post, we have covered Vapor, its latest release Vapor 3.0.0 and why iOS developers should consider knowing about it (and thereby, using it.)

What is Vapor? What makes it Swift’s most used framework?

Just as Swift is open-source, Vapor is also introduced as open-source licensed software by Tanner Nelson and Logan Wright in January 2016. It is the most powerful and perfect framework, built using Swift. Vapor’s SwiftNIO based non-blocking and event-driven architecture, alongside the protocol-oriented and expressive design, makes it a worth-learning modular framework for iOS and Swift devs.

Vapor utilizes Codable for the parsing and serializing of HTTP message data, for the creation of DB Models and rendering the views. The framework supports Xtensible Markup Language too.

It’s due to its amazing usability and performance that Vapor is the most-used server-side Swift framework at present.

It took too long for Vapor’s creators to come up with the 3.0 version of the framework. The reason is - They were busy in increasing robustness of the code, optimizing it, adding new module and preparing long and helpful documentation and API Docs.

Simply put, everything is new in the latest release of Vapor, i.e. 3.0. Vapor 3.0 brings full native support for Swift 4’s Codable-Standard Library, which is almost used everywhere from decoding to accessing the data and reading the queries. Now, Vapor runs on SwiftNIO.

Swift has become the most appealing solution for the mobile and macOS developers. It is the fast and safe language by design and it allows developers to develop the product with frontend and backend server side Swift.

Out of numerous benefits Vapor dishes up for the Swift developers, the main are:

By now, you must have understood that it is easy to create performance-oriented and beautiful APIs and websites using Vapor. So, let’s talk about how to get started with it (in the next section).

Vapor is available for MacOS and Ubuntu Operating systems, where it auto-installs Swift on your system (in the case of Ubuntu users).

Vapor can be installed via any Swift Package Manager. It requires Swift 3 and XCode (the latest version). You may also install Swiftenv, as it will make it easy for you to switch between multiple versions of Swift. Now, install the Vapor toolbox using the following BASH command:

From SQL to PostgreSQL, NoSQL, Mongo and more, Vapor supports multiple databases. So choosing the Database for your Vapor project is up to you. This framework not only provides a native connector for SQL Languages like PostgreSQL, SQLite, and MySQL but also provides its native support to MongoDB and Redis.

You may also use the PaaS solutions like Heroku, to swiftly deploy your app’s code to run online.

The core packages, available for installation, are:

Vapor lets you handle to multipart Form Data like a breeze; it parses and serializes mixed form-data. JSON and Swift Wrappers are there to make your work easy. Vapor has its own template system, called leaf; it is natively swift. It has been designed to work well with the Vapor’s engine.

The framework has an in-built Crypto module so that security implementations could be deployed smoothly. The new version of Vapor, i.e. Vapor 3.0, allows hashing with or without authentication. Decryption and Encryption can be carried out through ciphers. There is another thing to talk about, called BCrypt, which is a pure Swift implementation.

What does it mean for iOS Developers?

If you are into iOS development and require to code backend and iOS simultaneously, Vapor can become an easy getaway from switching between languages for you. With Vapor and its strictly-typed programming mechanism, you can stay consistent by using one coding language and style.

Vapor is perfect for developing websites and APIs. It is flexible and strives to speed up the development process by simplifying the coding task for the developers. Written purely in Swift and having its own Swift Parser, this highly-expressive framework can lay in the foundation of your upcoming projects.

Mobile App Monetization: What you should not miss
When is the right time to launch your iOS app?