Unveiling the top 7 features of iOS 11! 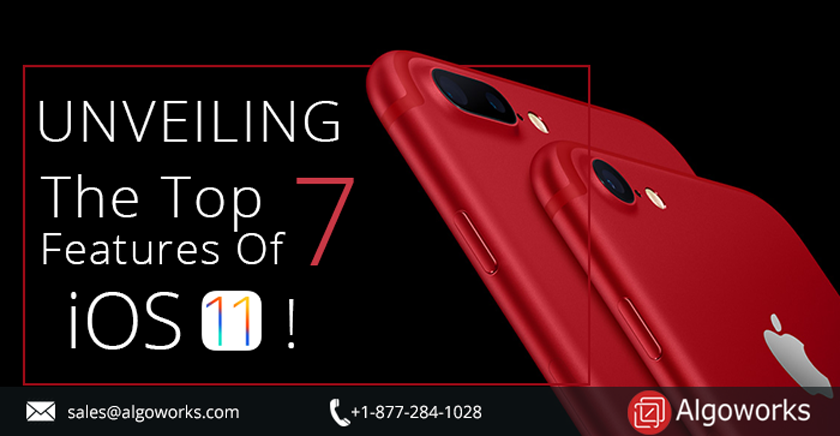 iOS 11 is a gargantuan leap in the i world. iOS 11 was unveiled by Apple this year at the world renowned WWDC, proudly proclaiming its newer and sharpened features over its predecessor the iOS 10.

iOS 11 sets a fresh standard and raises the bar of the world’s most precocious mobile operating system. It opens up the gates to entertain the most amazing possibilities for Augmented Reality in the world of games and apps. Thereby, iOS 11 is all set to make iPhone and iPad the most powerful and intelligent devices we’ve ever seen before.

Grab a seat and brew yourself a cup of steaming coffee, let’s browse through the latest features of iOS 11 and be a little judgemental about what makes it so special.

The control centre has been redesigned and even though it is facing an imbroglio on how it could potentially look to have everything customizable on a single screen, people are getting pretty amazed at the thought of having everything under one roof. It packs all the imperative features into a single page and has got new sliders. It also enables 3D touch to allow prompt access to myriad settings and features, thereby vouching to make our lives a lot simpler.

One of the crucial things that probably makes an iPhone ‘the Phone’ is its brilliant app store. Apple finally took a major step to give a powerful makeover to the App Store that the users had been asking for. It will give us a richer and more immersive experience with app discovery. Game apps have been segregated from the remaining apps, thereby simplifying the process of relevant app search and aids in time optimization.

The all new iOS 11 has brought a whole new bunch of updates for the message apps. It includes an app drawer that contains stickers. The new Apple Pay peer-to-peer feature helps you pay your contacts via iMessages itself and it also makes use of the Touch ID fingerprint sensor and money transacted will go into the Apple Pay Cash Card you can indulge in further Apple Pay Payments or put the money back into your bank account. There is also the option in iCloud that will automatically sync all the conversations across various iOS and macOS devices.

Yet another master stroke of iOS 11 is the introduction of Offload Unused Apps. It gives you the provision to automatically delete the apps you do not use frequently. Not a shocker but it does it in the best possible way. Whenever you are low on storage, this option aids to get rid of the most infrequently used or undesirable app on your phone, however intelligently, retaining the data and documents so that you can always get the app back just by tapping the grayed-out icon. This is definitely great news for the 16GB iPhone holders.

YOUR FILES ARE THERE WITH YOU

The File app brings all your files together and makes it a lot more convenient to browse and organise all your files in one place. There is also a dedicated place for all your recently handled files. These files do not only include the files on your device but also the ones present in your MOBILE apps and other iOS devices, on iCloud Drive as well as on other services like Box and DropBox.

iOS 11 has made Siri undergo a massive overhauling. The assistant is stuffed with new capabilities like translating a wide variety of languages and it is going to sound a lot better. Another imperative feature that Siri just got is the ability to respond to texts that will make googling more lucid than ever before. Just talk to your phone!

Apple has always laid focus on enhancement of the Notes feature and iOS 11 comes across as no exception. Apple has done a fabulous job by enabling scanning of docs seamlessly into Notes. All the scan docs are in absolute sync across all the apple devices and it is super-fast to share the scans. You can easily edit your docs after scanning them and tap on the same to bring up the editing toolbar to put filter, add more pages, rotate, crop and a lot more.

There are many more features that will keep your eyes glued for iOS 11. These seven features are just a few handpicked ones which we feel will have the max impact on the most intelligent systems thriving now but there are more to astonish you. So, which one is your favorite?

Why social media platforms are evolving day by day
How can chatbots aid you in running a successful business operation?