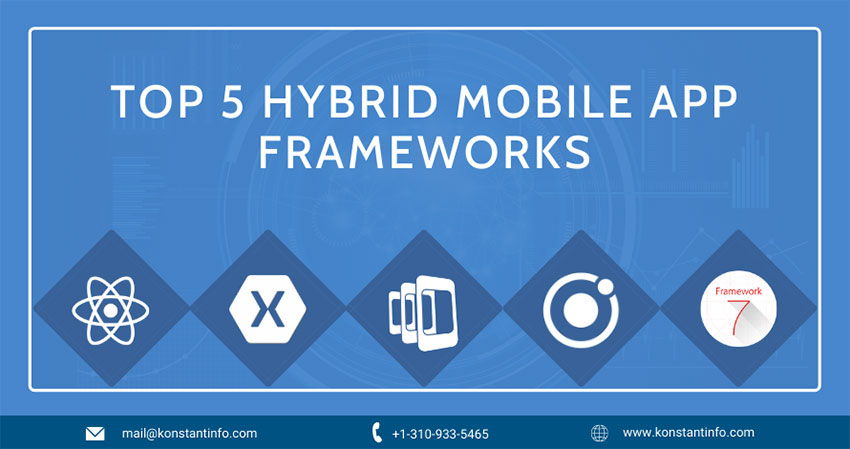 The fact that technology developed by one company to promote one of its services can turn up into a popular framework that can work across platforms, sounds interesting!

Mobile and internet technologies have been quick enough to make people surf the web or access apps everywhere and anywhere they go. Traffic from mobile applications (native, web) shot up more than 20% by the end of 2018. The exchange of information on internet which is embedded in the foundation of modern society led to the exponential growth of modern technology and vice versa (if that sounds correct).

Now with 5G, customers have the potential to supercharge the exchange of the data and give consumers high-speed access to a range of content through their mobile devices. Such development often prompts businesses to invest in mobile apps. But does every business have a requirement to build mobile apps? Check out most popular hybrid mobile app frameworks to work-around the need:

Many companies like Siemens, Slack, and Pinterest, etc rely on Xamarin Application Development for developing mobile apps across platforms. It is used in enterprises that have their feat in energy, transport, and healthcare sectors. Developers used C# integrated into the .Net framework to build apps for different mobile platforms. Xamarin binds native open-source libraries that are available for iOS and Android along with many .NET libraries. It is a hybrid app framework to develop apps for cross-platform via two approaches Xamarin.Forms and Xamarin.Android/iOS. It allows writing code for iPhone app on Windows and compiles it for Mac.

Phonegap is a cross-platform app development framework that allows web developers to create mobile applications using their existing knowledge of HTML, CSS and JavaScript Knowledge of native platforms is not required for PhoneGap App Development. Phonegap supports most of the popular mobile application platforms like Android, iOS, Windows, and Blackberry. This framework helps PhoneGap Developers save on time and team efforts, not requiring dedicated platform-specific developers for separate builds, which saves cost. The same codebase can be used to create a build for multiple platforms.

Phonegap also eases native side communication using plugins which gives the effortless feature of including only the features which are required for your application. For example, if you may need a camera feature in one application and push notifications in other or somewhere you would like to add both. You just need to install and import plugins and use them. Using only what is required saves space of build.

Ionic is an HTML5 mobile app development framework for hybrid application development. Hybrid applications are essentially small websites that run in the browser shell in an app having access to the native platform layer. Moreover, Ionic acts as Bootstrap for native and is a front-end UI framework having support for a wide range of common native mobile components, design and animations.

Ionic comes with a very native mobile UI element and layouts with a native SDK on iOS or Android. It can be used to develop some of the most powerful webs applications that eclipse the existing HTML5 development framework. It requires a native wrapper like Cordova or PhoneGap to run as a native app since Ionic is an HTML5 framework.

Framework 7 is an open-source platform for creating hybrid apps based on the HTML framework to develop hybrid mobile apps or web apps. It allows developing via HTML, CSS, and JavaScript with ease and clarity. This framework is truly focused on iOS and Google Material design to bring the best experience and simplicity. Framework 7 comes with certain useful features like native scrolling, the transition of pages, library agnostic, support for multiple views, hardware-accelerated animations via CSS3, a combination of XHR to enhance page routing, preloading and browser history. Framework 7 comes with the ability to quickly build iOS and Android apps with HTML, JavaScript, and CSS. It shares some similarities with jQuery syntax and some other frameworks like React and Angular etc. The applications are automatically faster and more responsive, have flexible router API, availability of widgets and components.

Hybrid applications can be perceived as mobile-optimized websites that can essentially reduce a lot of effort, time and cost on part of developers. Although creating cross-platform or hybrid applications might not be a perfect solution to all the business problems, but these can help in the case of mid-size businesses that focus on fast deployment and wish to have user experience close to native applications.