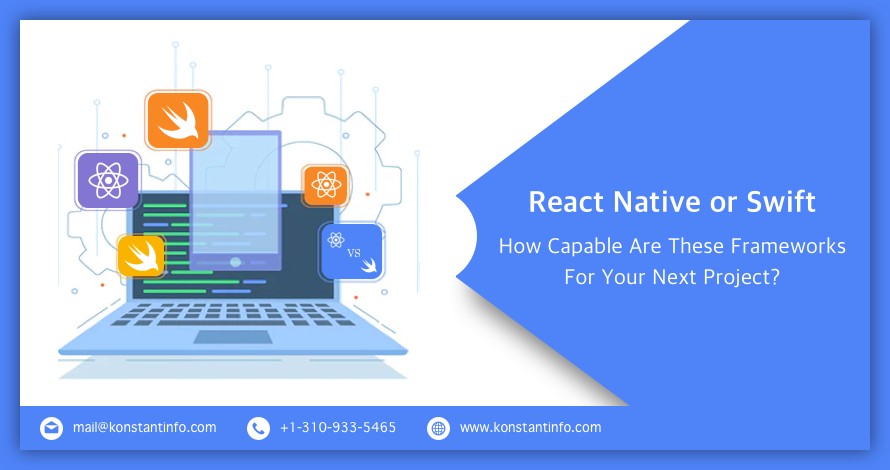 Why should we differentiate Swift and React Native? Is there anything in similar? Know the features that distinguish both app development frameworks here!

What is this article about:With this article, we hope to clarify some critical points of difference between Swift and React Native based on key factors like performance, coding speed, size of the application, debug and testing experience, integration with CI/CD tools and many more.

Similarities in Swift and React Native

Why is a comparison between React Native and Swift necessary?

We do not build a 'mobile web app' – can be essentially perceived as a web app wrapped in a native container. Compiling the JavaScript (JS) code to a mobile app similar to an iOS app built with Objective-C or Android using Java, React Native (RN) has the dual advantage of enabling the development of both native as well as hybrid technology. It can enable the development of both big as well as small projects. A clear comparison between React Native (RN) and Swift can disclose the actual benefits.

Swift is backed by Apple and React Native is backed by Facebook. It is designed as a step ahead than Objective C, following all OOPS programming concepts and backing up most of the iPhone applications.

React Native is not producing native applications. But can be used to write code that works across platforms. It works wonders by leveraging the internal API's and libraries to make the app work. This is more about adding a middle-man between the code and the platform.

Swift, on the other hand, produces a native app that may leverage all the platform's possibilities. This framework performs better with graphic effects and computational-heavy tasks. Although Swift can create highly performant applications, it is not helpful with code optimization.

React Native is backed by Javascript that makes coding and debugging easy. It further helps in the compilation of the JavaScript codebase to a mobile application similar to an iOS application that is built with Java (for Android) or Objective C/Swift (for iOS). These uplifts React Native app development and cults all comparisons between React Native vs. Swift.