Mobile apps and subscription monetization are a match

App monetization is not new to the app economy. Companies invest heavily in mobile app development and they need to continue doing so in coming years. And you need funds for it. Not everyone desires free apps, a large number of users are ready to pay for a mobile app if they have unique features and they stand out from the rest. Also, users favor apps that are continuously evolving and mobile app developers need to update their apps regularly to keep the users impressed.

LOOKING BACK AT HISTORY

A new trend is increasingly becoming popular in the app monetization model and leading app stores like Apple’s App Store and Google’s Play Store have taken note of it. Welcome to the world of app subscription monetization. As the name suggests, the subscription monetization requires the user to pay a certain amount to unlock premium features but the access is time-based (for 3 months, 6 months or a year) whatever the app owners feel right.

There are different reasons to consider the subscription model:

Once your mobile app is in the store, you need to ensure it keeps functioning properly. If the user faces any issue due to any bugs you need to fix the issue as early as possible or risk losing the user. Apps depend on third parties like Google, Apple, and Facebook, Twitter or SoundCloud. If Google or Apple releases a new OS or updates its current OS or Twitter or Facebook change their API, you need to ensure your mobile app stays compliant with the new changes.

In most cases, you will be required to update the mobile app to ensure it functions properly after the change in the software environment. If you intend to continue supporting your app through years, you will need consistent revenue streams which can be achieved through subscription monetization model.

Apps need to be updated

Having a mobile app is a continuous process; you don’t develop an app for a limited period of time. Since many mobile apps are used for communication and more frequently, you can’t develop an app and forget about it. App owners that take mobile marketing seriously update their mobile app more frequently. Some update their apps every week, while some update their app every month. Whatever the case, the truth is mobile apps need to be updated to maintain compatibility with changes in software and hardware environment and stay relevant to customer’s needs.

Updating apps requires funds and one-time fee collected from your users are not enough to fund the mobile app development costs. The subscription monetization model ensures your current users continue funding the development of the app and that they will always have the latest product releases. The subscription monetization model ensures your company is not starved for funds and your app will not look outdated on new Android OS or newly launched iPhones. 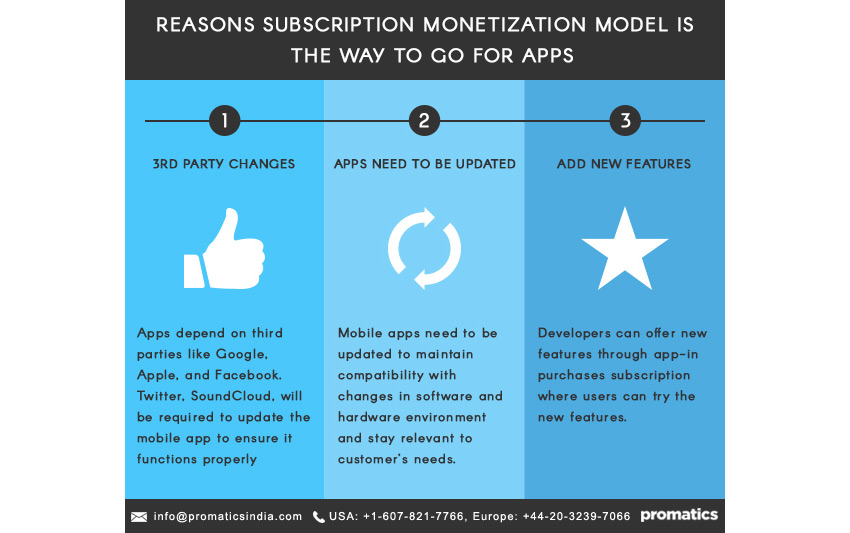 BENEFITS OF THE SUBSCRIPTION MONETIZATION MODEL

When you are able to predict your future earnings you can plan major upgrades and be confident about marketing efforts without constant fears of failure. Knowing your existing user base will be paying you for next 6 to 12 months will give you the much-needed confidence and every newly added user will only make you financially stronger.

The core strength of subscription monetization model is based on stronger user relationships. The one-time payment is considered to be one-and-done sale that does not provide a platform to build relationships. When you embrace a subscription revenue model, you go that extra mile to keep your users happy and implement engaging plans and retention techniques that are not possible with one-time payment model. To ensure bright side for repeat transactions, mobile app owners have to gauge the value the app offers through different engagement techniques and provide fresh content and new releases to keep the user engaged.

Customer lifetime value is an important metric to analyze the success of your mobile app. Unlike one-time payment or occasional in-app purchases, the subscription model is monthly or yearly. By giving fresh content and bring more value to the experience, the mobile app developer can lure to continue with the subscription which increases the average revenue per user. 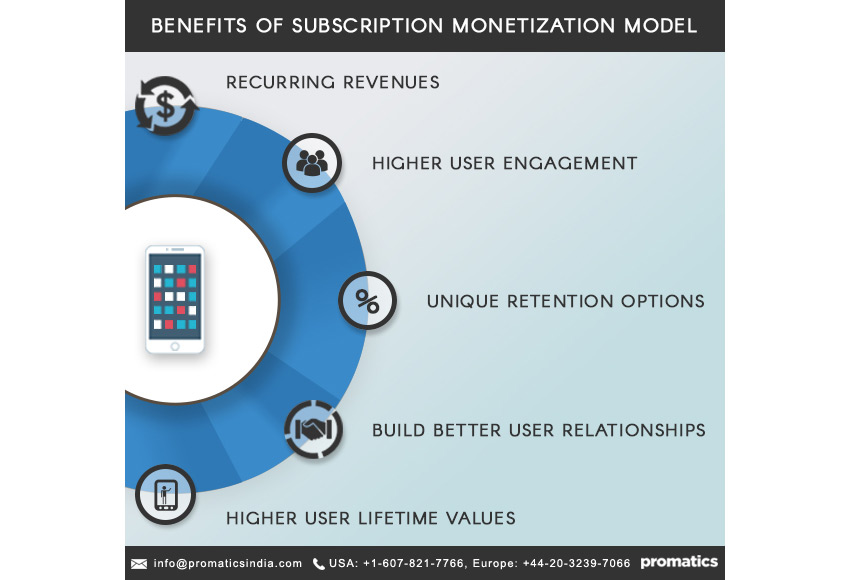 If a user unsubscribes, you have the option to rope back the user by offering a discount on future monthly subscriptions. There are many cases where the unsubscribed user continues using the app as the discount pushes them to stay put.

The subscription-based apps also have higher retention as app owners have the option to lure users with a discount on 6-month and yearly subscriptions. Users like to save money and they are happy to extend their commitment in exchange for a low price plan.

With the competition ever rising, app owners find it hard to maintain app engagement. But things are different for apps embracing subscription revenue model. Since the user is paying money regularly, they will be using the app more to get more value for the money. They will be providing more feedback and suggestions for improvements to ensure they get maximum value out of your app. Since they are paying every month, the users feel more obligated to use the app and the result is you have a more engaged audience.

There is no doubt the subscription monetization model offers a reliable and powerful revenue stream that is attractive for app owners and mobile app development companies. Another fact to be noted is that subscription based apps have higher perceived values as the users will not be interested in spending their hard earned money until your app offers more value than your competitors.

Subscription based apps are held to different standards when it comes to pricing and the value they offer. A professional mobile app development company can suggest a great subscription model for your app that not only will deliver value to your users, but will also help you build a lasting revenue strategy.