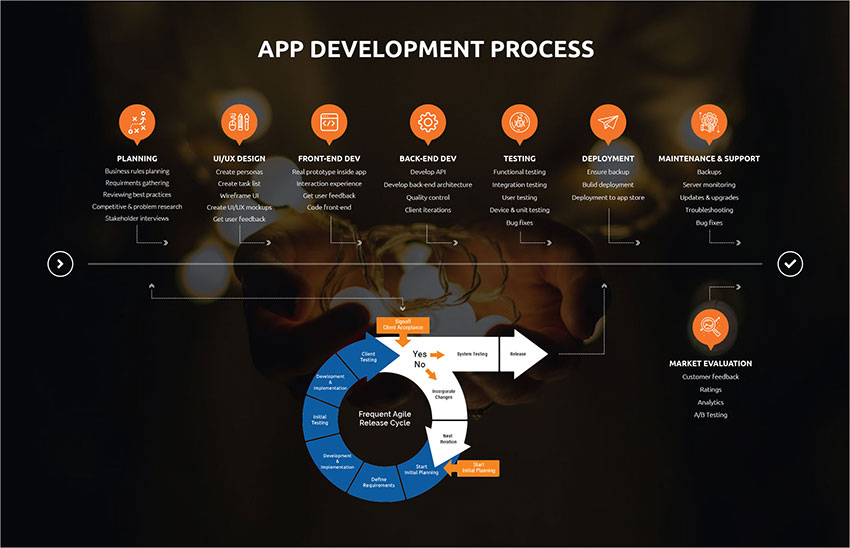 Do you have a plan for an app that you think has the potential to impact an industry minutely?

But just having an app idea and capital to invest cannot be the sole guarantor of the success of your app.

As you are reading this blog, many apps are being added to various app stores. With the businesses reading and acting upon the importance of staying connected with their respective audience and the continuous technological advancements, the world of app development is booming at a remarkably rapid speed.

You go to your App Store or Play Store, and you will find a multitude of apps catering to a single target group, but while some apps have been downloaded by more than a million people, other apps tank into oblivion.

Which is why we suggest that if you got an idea that you strongly feel would be of good use to a section of society, but are struggling to navigate your way about it, always reach out to industry experts like Saffron Tech. A one-stop solution to all your custom mobile app and web development services, SaffronTech mobile and web app developer’s approach your mobile app and web development idea with a strategic approach to proffer comprehensively bring into being your idea that will hit a bull's eye with your users.

Why do we suggest reaching out only to dedicated mobile and web app development organization?

Because while the aggressive innovators are investing everything in their power to materialize their app ideas, web and mobile, unlike earlier when an app launch was a “mazeltov” moment, now if your app has quality along with functionality then only will it be able to survive in the competitive mobile and enterprise market.

Have you ever given it a thought that why some mobile and web application never succeed?

A vital and contributory factor to this is their thought process, which is to spark an overnight success story. While we all are hustling to reach the zenith in out respective industry, those associated with mobile/web app development and tech business need to emphasize and accordingly work on the fact” why mobile and web app fail ?”.

Mobile and web app developers should critically analyze the reasons behind the sinking of various apps and make headway into app building with the solution to those failures, into consideration.

Today let's delve into why certain mobile and web apps are downloaded in billions, and some remain stagnant in thousands:

Aside from the educational qualification, it is essential you take a good look at the prospective developer's experience. Only hire the one with demonstrable expertise and adequate technical expertise.

Testing is an intricate process and one of the crucial determinants of the app’s future. The prospective developer should know all kinds of testing and which platform demands which one. They should be thorough with the contribution that each process makes in the development of the app.

Through their past experiences and their answers carefully observe whether or not they pay heed to the guidelines and adhere to the restriction set by each application store. A non-complying app developer could land you in trouble. Furthermore, it is also essential to know how do they approach the post-deployment support and maintenance to make sure the app stays updated.

Not just the mobile app marketers, but those who have built the app from scratch, developers should know what and how it needs to be done in order to generate revenue from the app.

Don't just offer the project to a developer who claims to understand the scope, materialize your idea effectively and settles with a bargained fee. Several elements make a mobile app development budget such as the scale of the company, the various platforms, architecture, resource, and team allocation. Just to cut few corners, if you hand over your project to a developer who despite realizing the scope of the project isn't honest about the cost that would go in it, the project’s development will be halted, doing more harm than good.

An app with an unsystematic path will only add to the ambiguity of the user who is still trying to understand their way about your mobile app. Most app developers, in their attempt to create a long lasting impression and gather revenue, build the app without any proper flow. This miscalculation is sure to force the users to abandon the app quicker than expected.

Bombarding the apps with too many features, which overwhelms the users and they end up uninstalling it. It is vital for the business and mobile developer to communicate on what features do they want to emphasize and target their audience on. Stuffing features in the mobile/web app won't make it stand out of the crowd but get lost in it.

Testing is a crucial part of the mobile/web app development which determines the success or failure of the app. Did you know that App crashes cause 71 percent of uninstalls? Forty-four percent of in-app defects are found by the user or on public reviews in the app stores, reason being, overlooking the importance of rigorous testing. Testing helps in determining the loopholes, the deficiencies such as bugs. Launching an app without testing will be detrimental to your business’s overall health.

Unless you are hiring a platform specialist developer, it is crucial that you take into consideration all the minuscule to significant aspects of running an app on various mobile platforms. Fifty-eight percent of users are frustrated by interface inconsistencies. Not keeping into account the platform differences will frustrate your target audience, making them uninstall the app. Audiences prefer apps that can perform well, on all platform, Android or iOS.

A developer’s job does not finish at developing the app. For an app to reach its target group, it needs strategic and timely marketing pre and posts launch of the mobile app.

Most of the businesses don't think mobile marketing through and spend little to nothing in mobile marketing and research which has an adverse impact on their app success. App developers and marketers often overlook important aspects such as keyword targeting, customer’s reviews.

Businesses make the mistake of giving the app to the marketers once it is entirely made, which is a colossal blunder. The marketing team should be involved with the developing unit so that they can develop potent strategies that can market every feature to the required amount.

Not quantifying the parameters:

Post-launch marketing efforts counter even more. Businesses make the mistake of not quantifying the determinants of reach and success. By overlooking the parameters and not measuring anything, you are missing out on enhancing your apps versions.

Unable to identify the marketing channel:

Most apps description only includes the mainstream fixes, which although necessary but are not appealing enough for the users to update it. As a mobile/ web app marketers, one must make use of every marketing channel that they possibly can.

A well-developed, tested and the marketed app has success written all over it, but if you have exhausted all the money in building, testing and selling the app, how do you plan to generate revenue from the app without an adequate monetization strategy?

0.01% of mobile apps fail due to their inability to retain their financial health. Depending upon your development budget, you can opt for a monetization model, each with their own set of benefits and limitations. Some of the common monetization strategies are subscription models, which are to be billed monthly or freemium model where you have to pay for unlocking more features and so on.

The mobile app market is booming, and so is the requirement for mobile/ web developing experts. This escalation calls for vigilance and due diligence on the part of every individual involved in mobile app development, be it the businessman with the revolutionary idea or the developer with an impressive resume.

Gaurav Sabharwal is the Co-Founder and Business Head of Saffron Tech. He is a thought leader and technology enthusiast who believes in empowering businesses through digital performance engineering. Gaurav likes to write about the latest trends relate...