Is React Native a Cost-Effective Option For Development Across Platforms? 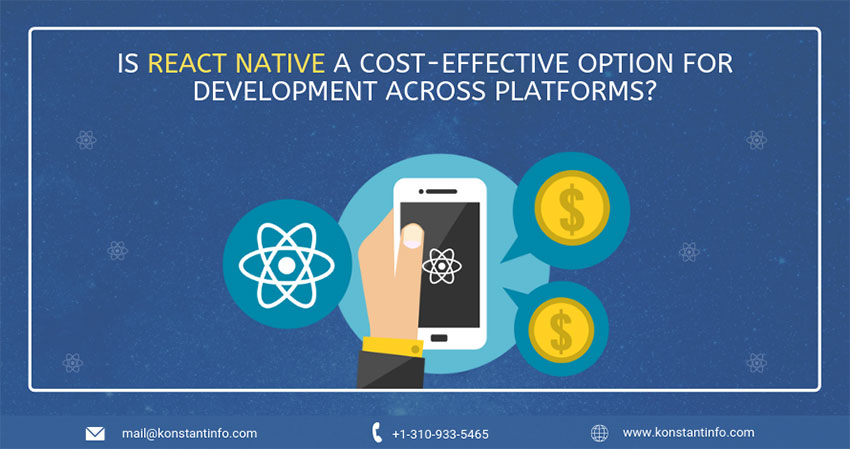 With emerging interfaces, software development kits (SDK) and programming languages, mobile applications are predicted to generate close to $188.9 billion in global revenue by the end of 2020 via App stores and in-app advertising. This is definitely a highly encouraging data for mobile app development companies.

Mobile app developers have always been after building iOS and Android apps. Developing applications for mobiles used to be quite challenging in terms of cost, effort, and marketing. However many frameworks, with the latest being React Native have increasingly been adopted by developers for cross-platform app development.

What is a Cross-Platform App Development?

Cross-platform development has more or less become a necessity, with the emergence of various mobile OS, increasing the use of mobile phones and various applications that demand best of iOS and Android both. In this case, developers have to be upright with their choices and have to come up with quick options. Developing for both iOS and Android with the very little codebase is cost-efficient and fast if features like performance and limited tool support are neglected.

Once a business decides to go for an app developer, developer immediately exclaims, "Which platform would you prefer - iOS or Android?" But the choices are unlimited and the market is scalable. As the customers want the best of both worlds, a business would never like to lose any one of them. In this scenario, they look for a middle way, which can provide them the potential of iOS and the amazing popularity of Android. The subsequent cost of development does not turn out to be very high either. Moreover, the annual maintenance charges are half of the apps compatible with cross-platform.

As already discussed above, development across platforms makes the process quick, requires less code as same components can be reused, easier to manage teams as they have to work on same modules with respective programming languages, helps in saving substantial cost and is easier to maintain.

With an abundance of various programming languages, the job of coding a program has become complicated. It is even difficult to decide the platform and preferable language. But it majorly depends upon the features required in the application and the characteristics of the programming language.

Why React Native is Preferred When It Comes to Cross-Platform App Development?

React Native as the current topic under the scanner, is an open source version of the JavaScript framework to develop React Native Mobile Apps. It is been used by many companies like Instagram, Tesla, Walmart to create mobile applications. It can assimilate codes written in Java, Swift or Objective C

The cost of the mobile application depends upon the operating system, app design elements, hardware, maintenance and support, application design – the cost of UI and UX, external API’s, cost of data security and app hosting are some of the factors that contribute in the overall cost of app development.

Most Used Frameworks in 2018 (Reported by Statista) 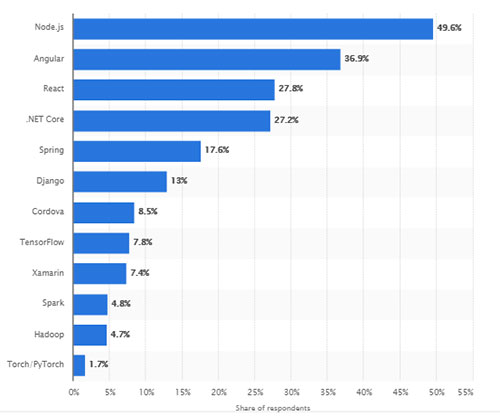 This statistic shows the most used libraries, frameworks, and tools during 2018.

It is the UI/UX of any application that gives a firsthand impression to a user. There is a prevalent tussle between React Native, AngularJS, Flutter being premier JS frameworks for front-end development. While factors like HTML/CSS, JavaScript/jQuery, JavaScript and CSS, Frameworks, Responsive Design, Version Control/Git, Testing/Debugging, CSS Preprocessing, Browser Developer Tools, Building and Automation Tools/Web Performance and Command Line are important; website navigation, the coding, layout with design are also important in addition to web technology.

The reason to prefer React Native is due to reusable code, ecosystem (which makes it raise objective C API’s to render iOS components or Java API’s to render to Android components. It has ‘more’ third-party packages that help it add missing features. The support of the community and online support from JavaScript experts who can offer effective solutions to problems is an additional advantage.