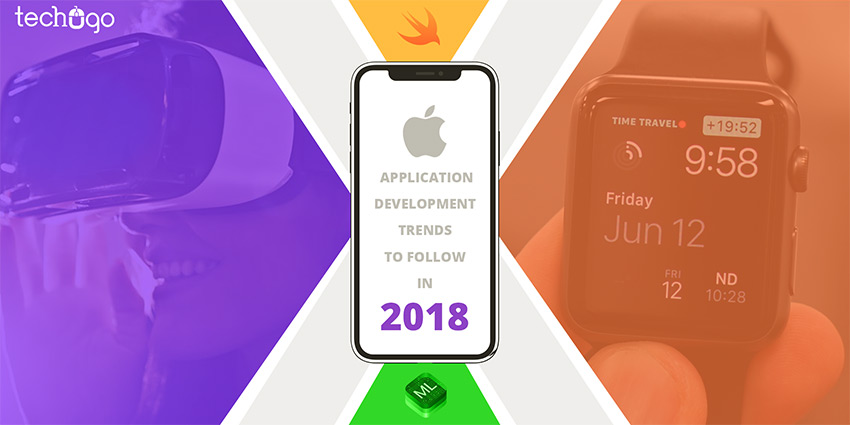 iOS has always been one of the most popular platforms and is preferred by most of the top mobile application development companies across the globe. As you can imagine, its popularity is not going to lose its charm in any near future.

Since the inception of iOS, there had been many technological trends, which stayed back and are going to stay for more and many other years, and some of those enticing trends we are going to share in this post today, which we believe are going to turn heads in the year 2018… Let’s unleash further.

The integration of Augmented Reality was much earlier discussed in the Apple conference in 2017. In the year 2018, AR is going to make it huge in the development market since the ARKit has been made compatible with the Amazon's Sumerian application platform.

With this compatible platform, iOS app development companies can easily develop the Virtual Reality and Augmented-Reality-integrated-3D-iOS-apps with ease.

Undeniably, 2018 is going to be a huge deal for Augmented Reality, as iOS developers can try their skill-set to flaunt their AR development expertise and attract a large number of users to like the iOS mobile apps.

The machine learning framework of Apple- Core ML would help create some of the most prudent mobile apps with rich features.

With Core ML, iOS developers can craft some of the most sizzling and unique mobile apps by writing only a few lines of the code along with the framework code.

Also, thanks to this system, mobile app development companies have the authority to access features such as barcode detection, object tracking, face tracking, and face detection to name a few.

There are plenty of libraries in Core ML: to detect faces, AI game development, and natural language processing system, which would eventually transform the way we interact with our devices.

Due to the facial detection feature, the security parameter in iOS apps would go to another extent, and the gaming industry would witness the real world of games, allowing for more interactive features.

Now WatchOS With Many New Apps

Earlier, with Apple Watch, the major restriction had been that it only offered a series of workout or health apps. However, since the launch of the latest WatchOS 4 version, users can now see a series of new mobile apps on their Apple Watch, which would be extending its wings to navigation, tour guides, and public transit, to name a few.

The utilization and the integration of Swift technology in the iOS platform is not hidden at all. Indeed, it is one of the most promising programming languages Apple has developed and it offers the never-ending support to the iOS and the Linux system.

Calling it an advanced version of the Swift 3 is not a wrong statement since it is pre-compatible with iOS, macOS, tvOS and Linux, and consists of a robust programming language which is easy to learn.

So on an ending note, Swift 4 would turn the app security system stranger than ever before.

In conclusion, we could say that 2018 is going to witness some of the most promising iOS mobile apps thanks to its remarkable development trends and there's definitely going to be so much for the users to explore.

We all know that iOS 11.3 has already set high expectations with its launch, so it is highly recommended that if you want a unique iOS mobile app project for your business goals, you get your iOS mobile app developed by one of the best iOS app development companies. Techugo has already set a matchless quality standard in the app development market by developing some of the most successful mobile apps for business brands and budding startup across the globe.

Top app development companies interview - MWC18: Vtrio Solutions
What you need to know to develop your own Education App