Increase app engagement significantly with the help of emojis

Regardless of whether you are =) or =( about emojis, there is no denying that they are integral to modern, digitally connected lives. With the latest communication and instant messenger apps, Android and Apple constantly releasing new and updated emojis for a variety of skin tones and around various themes, it is evident that these mobile emojis are here to stay.

Understanding the emotional strength of emojis

Statistics suggest that as many as six billion emoticons were sent every day in 2015 around the world through mobile messaging apps. While many may complain that the advent of emojis has resulted in the death of thoughtful expression in writing, researchers have found that emojis act as a powerful tool to give digital messages a human touch.

Mobile messages can often feel expressionless and impersonal. It is common for readers to misunderstand the tone of a text message, which in itself is proof that the tone and mode of a mobile message is often difficult to decipher without the availability of human expression. 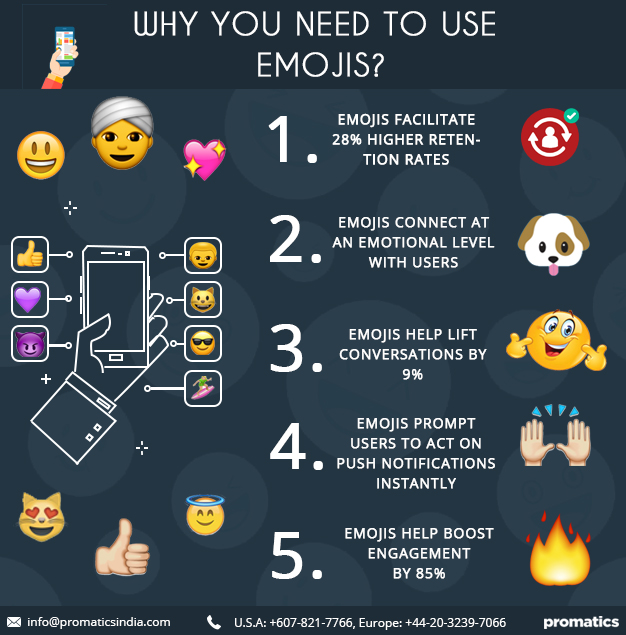 Now let’s take into account what mass communication brands send out to their audience members via mobile push notifications. Can emojis have any effect there? If yes, what does this mean for mobile app marketing?

Brands are already finding value in including emojis in their push notifications. It has been found that including the right emoji in a push message often helps drive the message in an effective manner. It is already known that buyer choices tend to be driven more by emotions than on facts. Emojis help bring out a sense of emotion within a message.

Using just one or two simple emojis is enough to appeal, inspire and engage a user. Using emojis is also a great way to cut down on words by substituting them with an emoji.

Should my brand be using emojis in push notifications?

Millennials and Generation Z mobile users make excellent targets for emoji push notifications. Studies show that as many as 64% of millennials communicate using only emojis on a routine basis.

That said, it is important for the brand to have comprehensive clarity on their target audience to be able to use emojis in the appropriate manner. Here are a few scenarios where you can effectively use emojis to boost engagement.

When you need to provide quick understanding

Emojis are extremely effective in your push notifications when the symbols you use relate well with your message. For instance, food delivery service apps may want to include an emoji of a pizza when they are introducing deals on pizza delivery. Travel apps could notify their audience about discounts on flights with an emoji of a plane. Country flags are often used by sports apps when they push notifications to users regarding the teams facing off against each other that day.

To give breaks in your text

Images are often used in web copy to break up paragraphs. Similar principles apply in push notifications as well. Emojis are an effective tool to use when you want to break up sections of text within a single push message.

To draw attention to your message

Human eyes are naturally attracted to colourful images. Using emojis the right way can make your messages a lot more appealing to your target audience.

To have some fun with it

If your brand personality revolves around building a casual relationship with your users, emojis are a great way to have fun with your communications. Adding the right emojis can add some spice to an otherwise mundane message.

To shorten the message

Emojis can act as instant representatives of certain words or themes, using them can allow you to cut down on the text that you use in your push notifications. This means that you can save valuable text space, preventing the users from reading long winding content or giving up mid-way.

Still not convinced? The following statistics may help you understand how emojis in push notifications are a great way to interact with your audience members.

When studying the open rates of push notifications of ones that contained emojis versus the ones that didn’t, there was a definite increase. Typically, push notifications experience an open rate of no more than 2.44%. However, with the use of emojis it was found that the rate went up to 4.51%.

App retention rates are rather low. Most apps tend to lose 79% of its users within the first 24 hours of it being downloaded. 98% of users tend to uninstall the app within 90 days of having downloaded it. This makes every user retained an extremely valuable one. Emoji-powered push notifications have encouraged users to stick around a little longer after initially downloading apps leading in a 28% increase in day-two user retention.

In addition to this, push notifications with emojis also facilitate improvement in the time one spends on an app. By creating compelling push notifications, they are able to encourage longer time spent on the app availing the various features an app has to offer.

With the revenues of global stores going up each year and the number of smartphone users higher now than over, mobile app development companies need to get extremely proactive when it comes to sending out the right messages to their users. Using all the tools at hand to bring out targeted results takes a lot of creativity and strategic planning.

How to save content marketing disasters
Kotlin, the newly minted Android coding language