How Cross-Platform Mobile Development will Excelsior in 2019? 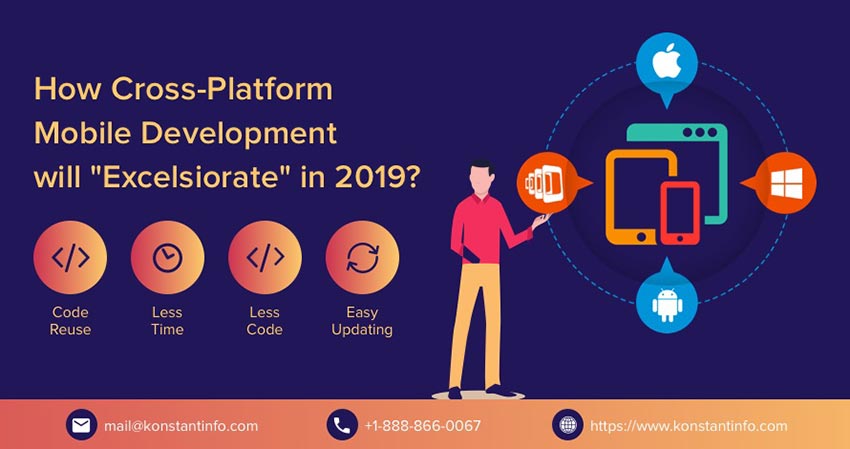 Hybrid apps share a common podium along with their native counterparts being an Excelsior in mobile app development!

Every business is adopted for a definite purpose and envisions to expand and promote their brand visibility to earn a return on investment and maximize profitability simultaneously. Making their presence on a mobile platform is one way to reach millions of users with its widespread use across the world. While developing applications for both iOS and Android is advisable and recommended for high performance, but reaching to millions with same minimal coding effort, in very less time with approximately similar efficiency like native mobile apps can all be achieved by having cross-platform mobile apps. Besides popularizing the business, app development cost of cross-platform apps is less and these can be developed with fewer efforts with the same code running on both platforms.

Not every development process is completely free of risks. While libraries and frameworks are trying to do their best in bridging the gap between hybrid and native app development, a lot of in-between efforts have to be applied precisely to build a robust application that does not break and all features run seamlessly to give their users a memorable experience.

Why opt for cross-platform mobile app development when native apps are fast?

1. What React Native can do?

React Native is a JavaScript-based framework that creates iOS and Android applications that are natively rendered. It especially targets mobile platforms and is based on Facebook's Javascript library – React that is used for building user interfaces.

2. What Xamarin is capable of doing?

3. How Native Script can generate native like hybrid apps?

4. How Flutter mixes and matches codes and shines like its native counterparts

Developers across the world try every bit to make the development process easy and smart. Cross-platform app development is a step to achieve a cost-effective API’s that save a lot of time and effort, reduce errors and synchronize both platforms seamlessly and also matching up with the performance of the native applications. A lot of research must be done before coming upon a conclusion to be able to make use of the framework upon which the app is to be developed. As there is no single answer to a particular problem, solutions will keep on cropping up for better.