Have React Native vs. Native as Tail-Enders for Your Next Project 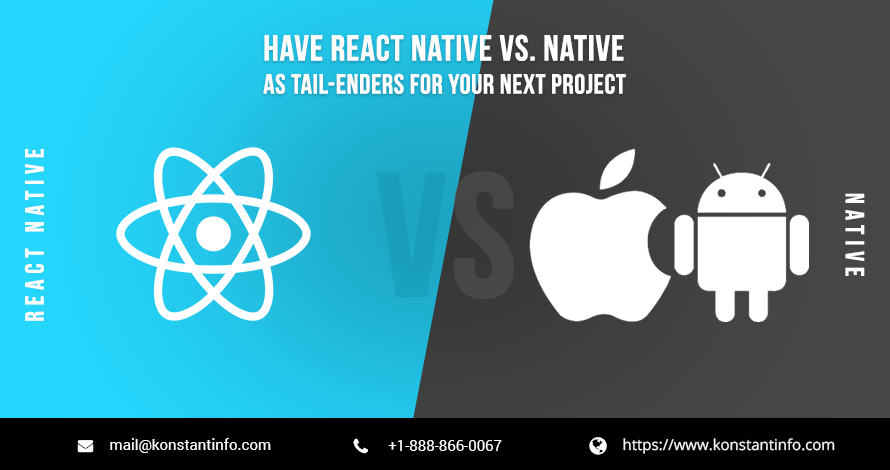 Defogging the hype around React Native and Native, let’s find some interesting information about the two famous development approaches according to prevalent trends:

Steve Jobs once stated, "It is the battle for the mindshare of developers and the mindshare of the customers and right now iPhone and Android are winning that battle." The global market has expanded to engulf several brands. It is about innovation, making the best products (best out of available resources and technologies), in an urge to ameliorate the ecosystem and if we do that well, more people are going to switch from Android to iOS.

It is important to understand the buyers and their business idea before creating a mobile app. It has to be curated, crafted and customized to maximize time/productivity. So how exactly do you transfer your idea scribbled on a napkin into a fully sustainable company?

Any native application requires the constructive units of the user interface. This approach applies to both iOS and Android platforms. A regular React Native application comprises of both JavaScript and React. But unfortunately, the same code cannot be used natively across all operating systems. But the programmers can still use most of the code to create projects spanning different operating systems. React native apps make use of native components, unlike hybrid apps that use CS or HTML. This solution often results in improved operation and seamless animation. Let's find out the pros and cons of using React Native and Native development approaches in this context. We'll help you bite your way through it!

When to develop React Native applications?

React Native is an open-source framework that combines the essence of JavaScript and React in its mobile app. It is used for creating applications across platforms saving a lot of developer's time, money and effort in writing code.

What to develop Native applications?

Native framework is used for building platform (OS) specific applications. Such applications can be built by making use of appropriate development tools, interface elements, standardized SDK, Xcode, and Android Studio.

It is advisable to use native app development when performance is a concern, a consistent interface and navigability is required, there is a need for the app to access new device features like (camera, GPS, accelerometer, connectivity, messaging, Bluetooth, BLE, Wi-Fi, web-browser, voice-based features, auto-correction and dictionary, multi-tasking, multi-touch, video calling, multiple-language support, etc.), and for better compliance with app store guidelines.

iOS has a remarkable third-party ecosystem with well-known developer tools such as AppCode, CodeRunner, etc. It is important for the iOS app to comply with the standards of the Apple App Store for performance, security issues, and valuable content to get approved and published on the platform.

So is React Native better than Native? There is no confirmed answer here. To be precise, the scope and requirements of the project and client's expectations with it are the defining criteria of selecting native or cross-platform approach. As far as we know pure native development (iOS or Android apps) are always fast, highly performant and have less turnaround time.

Cross-platform app development approach goes at its own pace. It is not as performant as its native counterparts, but the use of single code-base across platforms makes the app economic, saves developer’s efforts and subsequent time. Be sure to test throughout the build process, especially if you are planning on deploying to both iOS and Android.

In this hyper-connected virtual world that never switches off, n-number of people stay plugged into their devices while they commute every day. While React Native app development can be good for apprentice developers, native can be adopted by more senior ones. And if there is a need to have a simpler code, and performance is not a major issue, React Native is preferable. But native app development must be adopted where framework maturity, industry adoption, performance, programming language, simplified code structure, saving the application state and clear documentation are important to consider. As widely heard, Native app development requires the use of programming language and integrated development environment (IDE) tools like Xcode tool makes use of Objective-C in iOS and Android Studio makes use of Java and Kotlin language, etc.

Blockchain Technology: A New Dawn in Financial and Banking Sector
How to Hire a Top App Development Company