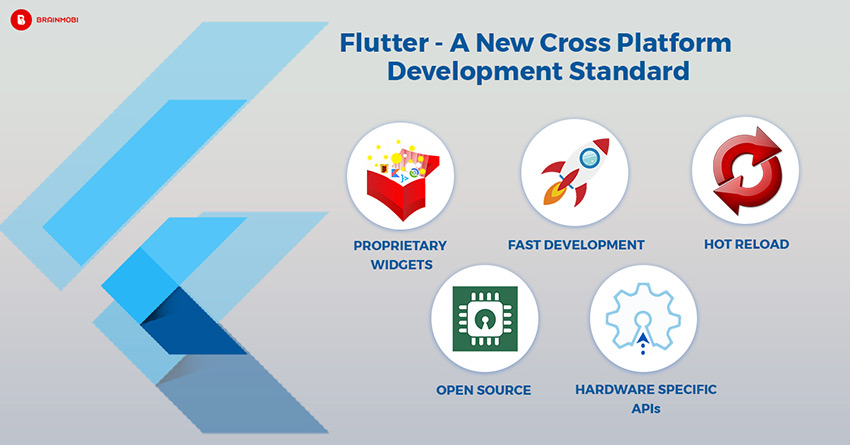 Comparing Flutter with React Native would be the same as comparing Neo with Morpheus. Nevertheless, the realm of technology is ruthless when it comes to evolution, and only one survives.

So while React Native, with its open source and healthy community feature, has gone on to set some great industry standards with Facebook Ads Manager, Bloomberg, AirBnb, Myntra, Ubereats and whatnot, the top app developers at Google have conceptualized another cross platform development tool called Flutter. Being the best cross-platform application development company, we at BrainMobi are working with the best tools and frameworks.

Let’s take a look at what Flutter is

Flutter is fast and can give better results in pace where React Native cannot. React has its standard of smooth operation set at a rate of 60 fps, which means dynamic user interaction tasks at 60 fps. Flutter can actually support animation tasks at 60 fps. As a result, it enables a mobile app to accommodate more challenging UI. UIs integrated with Flutter can look richer and give a super smooth experience.

The reason why Flutter excels over React Native is because Flutter is barely a year old, so it is easier to address and look over issues when you are starting something from scratch.

In the usual context of development, React Native incorporates the use of a bridge that transmits the crucial Javascript code and makes it accessible to iOS or Android. In a normal operation of any app, the entire code runs this full cycle of iteration every time a particular widget is called for. Basically: more operations, more cycles, more widgets, more bulk, and less speed are a few consequences of adopting old and outdated operations.

Let’s see how Flutter is a better choice than React Native in this context: Flutter incorporates a factor called Dart, which eliminates the need to use a context switch or the “bridge”, and, as a result, it breaks this orthodox structure of code implementation. Dart is nothing but a programming language that is compiled ahead of time into the native code structure itself, and also subjects the entire code directly to the environment of the respective platform it is supposed to work upon.

Widgets are an important feature for any mobile app. While apps developed with React Native have to rely on OEM widgets or DOM web views, the Flutter architecture has its own widgets and enables it to be solely a part of your app. This independency allows you to customize it and make it more extensible, thus, contributing to the overall scalability of the app. And, above everything else, it lets you incorporate a more stylish and fancy UI which can come handy especially to your commercial apps.

A Summary of Advantages

It would be a hasty move to make a switch towards Flutter for your mobile apps. Here are few issues that still need to be considered by mobile app development companies:

Nevertheless, Flutter is still one of the most anticipated trends in the world of cross platform development. It is sure to give a good edge to UI and mobile apps. We at BrainMobi are constantly updated with upcoming trends in development technology and that regards us as one of the best mobile app development companies. If you have an idea for a mobile app, feel free to write to us.