Everything You Need To Know About React JS 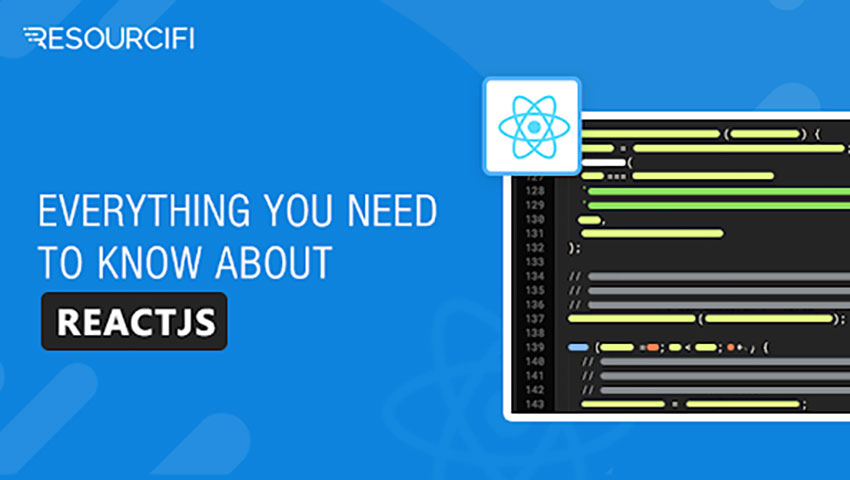 React has become such an influential tool for web application development that everyone is eager to use it for their dream projects. But there are many attributes of React JS which you need to acknowledge before hiring ReactJS developers. Top three questions that are mandatory for an Appreneur to determine are:

What are the features of ReactJS?

Why to choose ReactJS?

Let’s resolve all the queries one by one.

React, is an open-source JavaScript library used to build user interfaces particularly for single page applications. React is mostly regarded as a full-fledged framework, however, it is only a library in actual that offer reusable components for developing interactive UI. This does not implies it is weaker than any framework rather React is much more flexible in usage. ReactJS is the cutting edge technology for front-end development as it encompasses light libraries.

Since you get the basic idea of ReactJS, it is equally essential to understand the innate aspects of ReactJS that are embraced by a ReactJS development company.

Here are some key features of ReactJS that make it loom over other front-end frameworks and libraries:

ReactJS app development follows virtual DOM where a virtual representation of a UI is kept in memory to sync with the real DOM. It is an efficient feature of React as the virtual DOM renders simplified platform to update an app. Just like the actual DOM, the Virtual DOM is a node tree that keeps a record of elements and content as objects and properties. React render() method develops a node tree from React components, each time there is an update in the data mode that change is reflected in the tree automatically. Also, virtual DOM boosts application’s speed.

ReactJS supports data that is flowing downstream, in a single flow. If the data has to flow in another direction then, you will require additional features. All this happens because components are supposedly immutable and the data within them cannot be changed. This way, ReactJS will only approve the data which is flowing in a single direction. Perhaps, this is why ReactJS developers consider it as the most reliable origin for the canonical data sources. It is what makes ReactJS, the best front-end library for creating highly interactive web applications.

There is another advantage of one-way binding, the data will not flow in opposite way which makes it easier to debug and the data becomes less error prone.

Facebook announced a native React framework back in 2015, namely React Native. It plays a vital role in building native applications such as Android and iOS. React Native comprises UI components to develop the JavaScript code. These set of components are useful for both Android and iOS platforms to build a mobile application with native look that saves the development time.

React uses a simple syntax which is as readable as a common language like English. Despite being so simple and easy to read, the JSX shares a great resemblance with HTML. It is a perfect combination of JavaScript and XML. JSX makes easier to write React components by making the syntax that ReactJS developers use for generating strings of HTML, almost identical to the HTML they will add into a web page. Web developers always adopt a time-effective approach this is why they prefer using ReactJS.

React JS has backed by the strong community of Facebook and Instagram as well as numerous external experts whose numbers according to an estimated survey is more than 1100 contributors. Besides users can also ask inquire their doubts on forums like Discussion forum.

ReactJS is full of rich-features that one can reap during ReactJS app development. If you are seeking to build an app then React is the best option for you. Discover the reasons to choose ReactJS over other frameworks or library. It is the future of JavaScript and can uplift any business type. Few of the factors that can reinforce your unique business plan are:

One of the supreme challenges of JavaScript frameworks is, they are not search-engine friendly. Though some progressive steps have been taken to reform this area recently but they are insufficient. Nonetheless, ReactJS stands out with server-side rendering and allows a JavaScript application to render on the server instead of in the browser.

Server side rendering offers so many benefits such as, it improves the speed of your site by speeding up the page load time, enhances user experience and ultimately convert the raised traffic into increased revenue. As React foster advanced techniques to improve the ranking of an application, many Entrepreneurs look for prominent ReactJS development company to bring their objectives in action.

Another advantage of Facebook’s ReactJS is it enables reusable code components of a different level at any time. This makes React more powerful as all of its components are isolated, any change in one component won’t affect the other. The access to reusable components is the biggest perk for a startup company who work on a small budget as they don’t need to bother about hiring an expert to rectify an error in the app. They themselves can resolve the issue and save the maintenance cost. Moreover, reusable components reduce the complexity of ReactJS app development by making programming more precise, comfortable, and ergonomic for the developers.

After the extended analysis of ReactJS one can easily evaluate its importance in application development. Before hiring a ReactJS developer just endure the answer to the following question:

Why should you hire ReactJS Developers?

Use of the Latest technology

When a team of skilled React professional works on your project, there is a sense of assurance that the final result will endorse the latest trends and technology.

ReactJS developers possess years of experience and knowledge. They aim to showcase their expertise by building top-notch quality applications.

Staff augmentation is the smartest way of hiring competent employees. You can develop a custom web application by outsourcing a React developer from well reputed ReactJS development company. It will save a substantial amount of money that gets wasted on wages along with taxes of permanent employees.

In order to develop a user-friendly and responsive single page application, you have to hire dedicated ReactJS developers.

Get an Extra Layer of Support & Maintenance

It’s not an easy task to manage all the web operations single-handedly. It is indispensable for a company to hire developers who renders support & maintenance to your existing website and keep it updated.

Hiring a developer from a certified company will provide you long-term benefit with maximum Return on Investment (ROI).

In a nutshell, ReactJS app Developers uses progressive technology that has never been used before in web application development. React is a potent tool to conceive high-performance presentation for your application. It is taking over front-end development, rather it is the future of JavaScript. React is a blessing for developers as it is easy to learn.

Anyone with a basic knowledge of CSS and HTML can understand React while Angular or Ember requires the proficiency in ‘Domain-specific’ Languages. React is mostly used to build mobile applications (React Native) and these applications can be tested with ease since React avails automated testing.

Hire ReactJS developer who is well-versed with the front-end development tools such as JavaScript, Core principles of React, Isomorphic React, RESTful API, Babel, Webpack and NPM. You can make a profitable decision for your Organization by hiring the developer with experience in data structure libraries. And make sure your appointed developer is skilled in ReactJS work flows- Flux or Redux.

Kritika Saxena is the Marketing Manger at Resourcifi, a Mobile App Development and Staff Augmentation Company. With five years of corporate experience behind her, she has rich technical knowledge. Her interests include writing about emerging technolo...