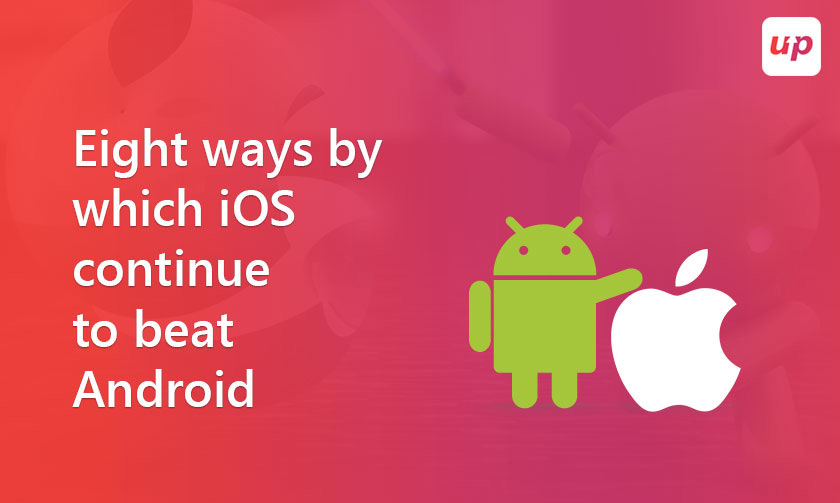 Any amateur mobile app development company usually encounters this confusion and that is to make the wise selection for the mobile application’s operating system (OS). Targeting the appropriate OS can be quite a laborious task. But both the Android and iOS operating system have their share of pros and cons. Still, Apple continues to steal the show either from the mobile app developers’ point of view or from the users’ end on the applications developed.

Let’s explore the areas where iOS excels over its rival, the Android operating system.

Innovative design lies at the core of Apple Inc. So it is not that difficult to guess that IOS applications and iPhones beat Google in both major fields. After all, Google is originally a search engine but Apple has always been a developer.

Both Android and iOS OS have different methods to update their system. Android updates only those devices that support the specific OS version, which usually cover a minute portion of the bigger picture. Also, Google cannot force another company such as Samsung or Lenovo to send an update since Google isn't building the Android versions rather it is only forwarding the source code to the other companies to build it by themselves. This lack of control over the devices results in the old software used on most Android phones.

Even if Google owns Android operating system, it has practically no say into how the major developers of Android handsets such as Samsung build the software outside of the things required to use Google Play. So the users are left with junk applications that are practically of no use for the users. They can either ignore them but run the risk of losing out confidential data to third parties. Apple users are in a comparatively safer position.

Have you heard of AppleCare? The iPhone users facing issues with their handset can easily walk up to an Apple Store and get it repaired easily. But Android devices come from different manufacturers and do not own a single help center for all the devices rather the users have to approach the individual companies that sold the Android handset. However, the experience does not come anywhere near to that offered by AppleCare. A single company is the overall in charge of everything that takes place on an iPhone, rendering better support to the users. Such service justifies the cost of the iPhone that comes close to $1,000.

Apple's iMessage is undoubtedly one of the best messaging apps ever created by Apple. It permits users to exchange texts without installing any application. But it only works on Apple devices. Google did try many times to give a similar experience to its users through Hangouts and Allo and both didn’t sell out to iOS users since they already use iMessage. We are yet to get outstanding reviews from users on Google Allo which lacks the facility of SMS and can only engage in verbal communication with those who use Allo as well.

This is an unhidden fact that both Apple and Google collect user data and ensure the complete anonymity and security of such information. But Google has made it almost impossible for any amateur to come up with their personal application and easily upload the same in the app stores.

However, Apple is quite stringent towards uploading apps in the store. Again, Android confers the responsibility on the users to grant permission to what an app can and cannot do with their device without explaining what those permissions actually entail to. iOS app developers find it quite a difficult task to upload their developed application in the App Store whereas the same task works like a breeze for the Android app developers. Such a move can cause the breach of security and privacy of the users. Hence, another reason for users to opt for the iOS developed mobile applications against the Android ones and easily switch over to iPhones.

Android market is segmented into groups based on the OS versions and devices. Android devices are generally designed keeping in mind the general class which are most unlikely to switch over to a new model as soon as the latest Android OS version gets released in the market.

Since most of the devices often do not support all the handsets, only 0.7 % users are likely to switch over to the latest version. Android mobile application developers face the immense challenge in designing applications that are supported by most of the OS versions irrespective of how old they are or prefer to design only for the latest version and lose out on the key market.

The problem gets more complicated once the mobile app developers realize the sheer number of Android devices in the world before designing the application especially when it comes to image optimization based on screen size, resolutions and device specifications. But iOS developers can split up their target market into 3 categories: iOS 9 – 76%, iOS 8 – 17%. Now you do the calculation.

Many mobile application developers, especially those who are practically amateurs in coding, prefer using the free app development tools available in the market to develop an application. However, there are risks involved with such applications since Google is highly lax towards applications getting uploaded in the Play Store against the iOS applications. Apple exerts a stronger control on the apps uploaded to the App Store and also the development tools are quality checked to maintain its reputation.

Apple has always nurtured innovative creativity which is aptly defined in the applications, devices, App Store and also reflected in its operating system. The founder of Apple Inc, Steve Jobs, strongly believed that "innovation distinguishes between a leader and a follower."

The key to Apple’s success till date lies hidden in his words: "A lot of companies have chosen to downsize, and maybe that was the right thing for them. We chose a different path. Our belief was that if we kept putting great products in front of customers, they would continue to open their wallets."

Hence irrespective of the high cost involved still the iPhone rules a major share of the market and continues to top the Forbes list for world’s most valuable brands. Moreover, top-rated mobile app development companies prefer designing applications on iOS platform where they can explore their hidden talent and get aptly recognized for the same.

Magento: best e-commerce CMS of all times
How to go global with your app via localization