Do not let your users abandon your app 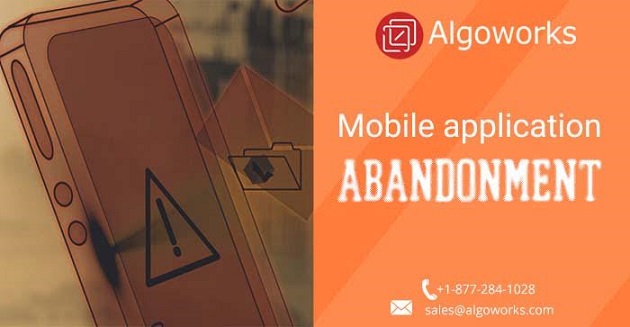 Smartphones or to be precise the mobile apps that house the phone have become an inseparable and integral entity of our lives. Each and every mobile app out there faces a cut throat competition. Standing on the bleeding edge of technology, each app competes for its target audience’s attention and a set of loyal users who stick on to the app.

Users are bound to and will definitely abandon an app if it has a critical registration process. The app users are comfortable if they can easily start using the app with minimal efforts. They want to be accustomed to the app as fast as possible, so if the logging in or registration isn't fluid enough your app potential users are bound to leave your app for good.

The app freezes or crashes

Another imperative and undeniable reason for app abandonment are crashes, freezes and hangs. Performance slogging is the major reason behind potential users downloading the app yet uninstalling it. Survey shows that 79% of users will only retry the app once if the first attempt was a failure or annoying. So it should be your top priority to get rid of the bugs in your app. If you think it will go unnoticed and nobody will take notice then it is high time to rid of your misconception and releases the fixes as soon as possible.

Time is money and nowadays everyone wants everything at a lightning pace. Waiting time has kept on decreasing ever since the technological enhancements. So when things like mobile apps fail to keep up to this ever growing pace users tend to quickly abandon the apps. Apps rely on various objects for end user engagement like content, video, animation. Further, these things rely on cellular networks, so you have to be pretty sure that your mobile app does not compromise with the load time.

However, compression is a definite way to reduce load time without compromising on the visually appealing and engaging elements. It can also minimize the memory footprint and thereby save your app from one dreadful graceful exit.

Certain mobile apps tend to collect more personal information than what it is necessarily required for the app to function normally. This, at times, might be required as well to safeguard the integrity of the app, but you should try to keep it to minimal. As it is seen that collecting a lot of personal information makes users uncomfortable and results in abandoning the app.

A mbile app for sure comes with a lot of features but it often takes a toll on the phone’s battery longevity. Various aspects that an app uses like cellular data or Bluetooth cause havoc to the battery life, so you have to clearly and carefully strategize and then design your application so that it drains your battery to a minimum.

On the other hand, another vital aspect of consideration is data consumption. Cellular data is a pretty costly affair for a major section of the society. Survey portrays that 20% of end users will abandon an app if it consumes too much data and they feel it is not worth it.

So if you are already a part or about to become a part of the rat race of the mobile app development then be sure to strategize carefully and improvise and incorporate everything possible to combat the above mentioned vital reasons to stop the potential users from abandoning your mobile app. As said, prevention is better than cure so be on it. Talk to the experts of the mobile app development company Algoworks for more details.

The perfect time for user acquisition? When the hackathon’s over
Top app development companies interview: AppInventiv