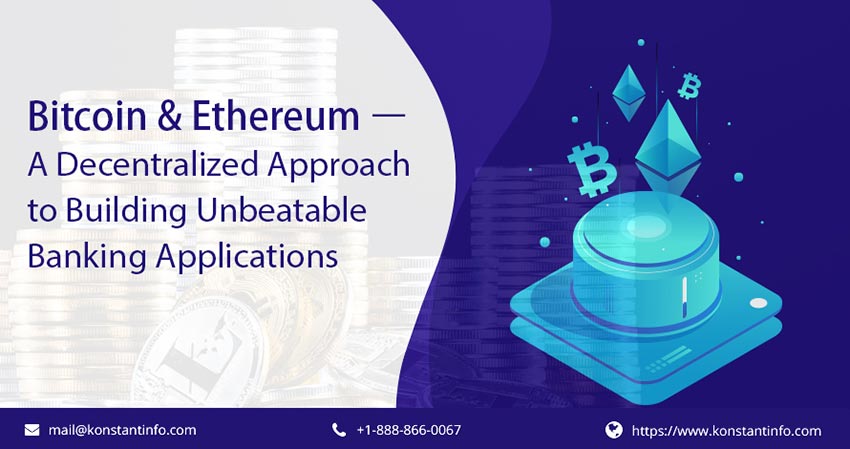 Yes, cryptocurrencies made a massive shift in the banking sector – The journey that followed was least imagined!

A cryptocurrency is a big electronic system that has eased digital transactions. It is an emerging class of assets that basically depends on specialized investments, they hold some value and can be sold in form of money like gold. These store mathematical values and work on complex algorithms. But the thing that needs to be checked is copy and pasting of digital data indefinitely by people. It can be safely said that blockchain is to Bitcoin/Ethereum, what the Internet is to Email.

Cryptocurrencies can be in form of Ethereum, Bitcoin and many others.

In very simple terms, Ethereum is a public blockchain network like bitcoin. Ethereum works in a decentralized way and is very useful for running smart contract applications and function in exactly the way they are programmed without any additional permutations and combinations or any rare possibility of downtime, fraud, censorship or interference by third parties.

What users of digital currency must know about Ethereum and Blockchain?

Some of the Features of Ethereum

Feature 2: Another feature of Ethereum is that it enables building smart contracts. This is essentially computing code to facilitate the exchange of money, currency and any kind of shares, property or any such thing. It is a self-operated computer program that runs automatically when specific conditions are met. This does not involve any kind of censorship, downtime, third party interference or fraud in any case.

What Challenges do Indian App Developers face with Ethereum and Blockchain?

Ethereum and blockchain are still facing some obstacles to mass adoption and scalability. Although Ethereum has outperformed Bitcoin and has set transaction records, still there are some major challenges that it has faced recently. The decentralized applications (Dapps) must be able to cater to millions and billions of users in the future. Other challenges are:

Some of the applications supported by Bitcoin in following domains

Security tokens can stir the traditional financial market by demonstrating value and bringing out hybrid blockchain models in its favor. Some of the basic terms used in this regard are cryptocommodities, cryptocurrencies, and crypto tokens.

Cryptographic tokens are used to incentivize users who are unknown to each other and do not trust each other currently. This sort of transaction encourages disparate groups to establish trust so that they can work together to build up a blockchain. However there are some rules in which this crypto economic incentive system works, is validated and new blocks are created.

One of the applications of such decentralized internet tribes is the emergence of decentralized autonomous organizations (DAOs). This binds people by sort of cryptographic tokens or incentives with transparent and legal rules.

Such tokens can be used for any of the following applications:

Decentralization of file storage is the transfer of authority, rights, access, and permissions from a single centralized server to multiple servers located at different areas. There is no centralized server in this case and every server has equal computing power. IPFS, Filecoin, Sia, Storj, Swarm, Maidsafe are used to add files during cryptocurrency transfers.

The Fate of Cryptocurrency

Will the US declare war on trade deficits? There was an outcome where different systems co-exist. Will a re-orientation of the crypto-currencies and brand new way of trading change any time soon? Here are the demarcations between most popular forms of crypto-currencies:

Should we invest in Bitcoin or Ethereum?

The final goal of investment in cryptocurrency depends upon the long-term growth, appropriateness, and performance of the transaction, security, and privacy of data and information and finally the place one wants to keep their money. Speculative investments in cryptocurrency are required depending upon useful applications being found in assets.

Indian app developers have been working on newer algorithms that are trying to replace Bitcoin and Ethereum but they also have to take care of government regulations.

The persistent rise in the price of these crypto-currencies is subject to speculative investments by users who plan to buy them in hope that they will be able to re-sell these to someone else in the future in return of money. Enterprise Blockchain has an unbound potential and is a backbone of decentralized applications now. These are now the future of applications in the same way as mobile apps did a decade ago. Sustainable growth of enterprise mobility solutions will depend upon useful business applications.

Which is better, a contract developer or a Permanent Employee?
How IoT Impacts App Development and benefits Developers