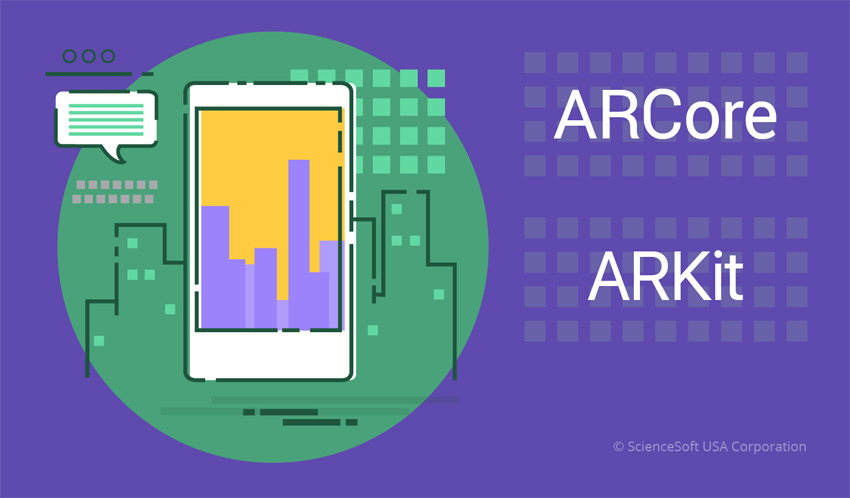 It’s been almost a year since the global Pokémon Go fever has broken out, giving every third person in the US a chance to see Augmented Reality. Thanks to Niantic, the users’ and developers’ interest in the AR technology escalated, and the mobile AR industry delivered $1.2 billion through 2016, which is twice the expected amount.

Given such successful results, it’s only natural that the biggest mobile market players took up the idea of enabling AR for smartphones. Both Apple and Google have announced the release of their own SDKs for AR apps this summer. ARKit is a part of the recently released iOS 11, while ARCore will soon be brought to millions of Android devices together with Nougat and Oreo updates.

AR development tools are already here. But what exactly are they? How do they differ from each other? And, most importantly, will they help you create the next global hit?

To some, the announcement itself may seem contradictory: AR apps aren’t new, why do Apple and Google try to reinvent them? Indeed, mobile app developers were working on AR apps before. Yet, it usually took 80% of their time and effort to implement basic surrounding-sensing principles. Many enthusiasts who had great AR app concepts in mind didn’t manage to overcome the first and most complicated part of its development.

Apple and Google have tuned this basis and suggest using it as a foundation for any AR app. They enable AR technology for more developers worldwide, letting them focus on concepts rather than complex and time-consuming calibration.

When taken by prominent market players, such steps often trigger industrial growth and evolution. As AR technology will become more available, the amount of app projects will escalate and a gradual improvement of the quality standards on the market will follow. This is why Google’s ARCore and Apple’s ARKit are literally the game changers for the AR industry.

DO ARCORE AND ARKIT DIFFER?

Since Google and Apple are both laying out the fundamental principles of AR, the two tools don’t differ much yet. ARCore and ARKit help developers handle the same issues: environmental understanding, motion tracking and light estimation.

The only difference so far lies in how the tools treat a 3D map of the surroundings. While scanning the environment, ARCore creates more 3D points, which altogether constitute a bigger map than that of ARKit’s. Moreover, ARCore temporarily stores the map, while ARKit doesn’t, so in case of any interruptions the former will need less time to recreate the scene.

To make any Android upgrades, Google needs to cooperate with OEMs. For now, the company has rolled the tool out only for Samsung S8 as well as its own Pixel device, and plans to bring ARCore to 100 million more devices until 2018 Q1.

Yet it all boils down to whether these devices get at least the Nougat update to be compatible with ARCore. Meanwhile, Apple have only their own iPhones to align a new iOS11 (and ARKit, as a part of it) with. In other words, ARKit will be available for about 300 million devices until 2018 Q1.

FROM ENTERTAINMENT TO UTILITY

Both AR tools were advertised along with demo apps that demonstrated the wide range of possibilities for users and mobile app developers. The most astonishing fact was the tools’ ability to meet the requirements of any application type and cater to the pickiest target audience.

For instance, Apple’s ARKit campaign presented My Very Hungry Caterpillar, an app displaying an augmented caterpillar that freely travels around the place and eats augmented fruits. The app developers mentioned that after observing kids under 10 years (their target audience), who tended to examine the caterpillar up-close, they had to make sure the graphics were of a high quality no matter the zoom-in.

Meanwhile, Google’s ARCore showcased an app that brought to life the characters from The Wizard of OZ. And not only do they look real, they also behave so. The Cowardly Lion grabs on his own tail and shudders with fear the very second the room’s lights go down. Just this example alone shows that the work of app’s sensors and regulated reactions has been calibrated to the detail.

Although AR apps certainly open new possibilities for entertainment, they prove to be useful and hands-on instruments for everyday life too. Ikea’s AR app, for one, allows their customers to choose any item from the company catalogue and superimpose it onto the image of a real room. The app developers are hooked on delivering various tools that make measuring an apartment perimeter an easy, quick and even fun task.

CONCEPT IS THE KEY

Now that the basic principles of AR are available for iOS and Android, both communities will gradually pick up the technology. Yet the challenge of adaptation is still ahead. AR app concepts are different from those of regular mobile apps in many ways. So, mobile app developers will have to not only adjust to new methods and tools of AR app creation, but also turn their thinking around to come up with relevant AR use cases.

With its Pokémon Go, caterpillars, lions and what not, AR looks like a mere toy now. Yet in actuality, we have hundreds of ways to benefit from the technology in business. For example, look at this AR-supported industry training concept or the already developed AR menu app for cafes and restaurants. AR app developers and app owners need to pay close attention to all these concepts now and choose the most hands-on ones. By implementing the ideas that both make AR shine and help people overcome some sort of a challenge at the same time, clients and developers will be able to live up to the technology’s full potential.

Anastasia Yaskevich is an Enterprise Mobility Researcher at ScienceSoft, an IT consulting company headquartered in McKinney, Texas. She started out in IT with research on cloud computing and UI/UX in 2013 and now writes on the latest trends in augmen...