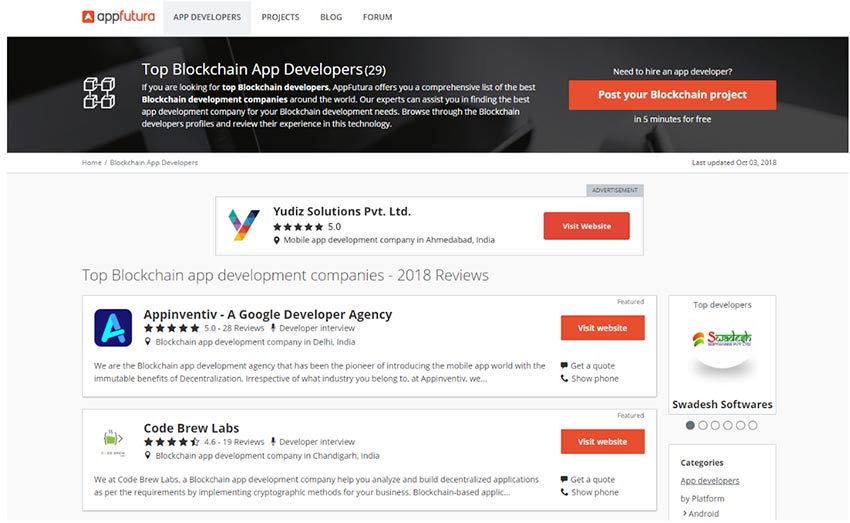 Things are evolving really fast in the Blockchain ecosystem. That's why we are proud to present our Top Blockchain App Developers directory, where all companies that work with this new technology can now finally be represented.

Why is Blockchain a relevant category for our users? Last year we published an article highlighting The use of Blockchain for mobile app developers. Rapidly advancing at present, the technology has become key in App development and offers users a competitive edge above the rest. The capacity of Blockchain to fuel App development is receiving a lot of traction.

Blockchain has disrupted the face of technology and finances, as it offers everyone with a platform to stay innovative and competitive. Becoming part of almost every debate in the last 10 years, Blockchain is evolving despite any challenges.

Why is Blockchain changing things for Mobile App Development?

Mobile apps are an indispensable business development tool. Increasing use of smartphones has led to a skyrocketing growth of usage of Mobile Apps. Mobile App developers are working with an open mindset to embrace any technology and laying hands on Blockchain has really turned out to be fruitful for developers.

Legitimization of the cryptocurrencies bought in a new acceptance to the underlying technology of Blockchain. Supported by business giants like Jack Ma, Blockchain is pacing into almost every sphere of our lives.

Recognition of Blockchain by technology epics like Microsoft and LG has made the world take a note of the technology that is brimming with security and decentralization aspects. Blockchain has proved its mettle to support the development of Apps with a purpose. Let us go beyond the theoretical aspects and witness its impact on the developer’s bench:

Management and storage of information on traditional Apps used a centralized approach inclining the information blocks to the risk of being hacked or stolen. Blockchain brings in decentralization not only to Fintech but to App development also. Such decentralized Apps are known as DApps where no single authority is responsible for management of App related data and information.

Typical characteristics of DApps are:

The autonomous operations of DApps have fueled from the aspect that it is an open source platform. With no centralized authority, DApps are more open to modifications, improvements, and adaptations. Although any change added would have to be approved by the DApp owners.

If Mobile developers choose to develop DApps, such Apps are cryptographically secured and run on a Blockchain that is open to view.

Every DApp will have its native tokens that will add a financial value to the project.

DApps can be built in two different ways. They can run on a native Blockchain or on Blockchain of other DApps. Currently, Ethereum Blockchain is used to develop DApps.

Development of DApps is not devoid of challenges. While the ecosystem is still evolving, but the when the developers reach the testing stage, the challenges magnify.

It is such a respite to have the data and information stored in a decentralized manner but the challenge lies in the process of doing so. As the DApps are open source and changes keep dropping in my multiple contributors, maintaining data integrity across the entire network of nodes is a big challenge that is yet to be overcome.

The Blockchain is facing regulatory issues across the globe. While some economies have embraced and regulated the same, developers may face challenges to deploy the DApps if the country of release is not in favor of Blockchain.

Bitcoin Blockchain received widespread attention only because of the security standards brought in by Blockchain. Using Blockchain technology for Mobile App development will work in favor of the adding high-end security aspects of mobile App security.

As the Apps developed on Blockchain are an open ledger, security provisions need to be too strong to resist any hacks and that is what the technology offers Mobile App Development.

Blockchain empowers Apps to manage the data in a secure and transparent manner. As it makes transaction entries on an open ledger, no one can tweak the data or information entries making the Apps inherently secure. They would eliminate the need of topping up the mobile Apps with further security plugins and more nor do the App developers and users need to worry about the data transparency issues as the data cannot be altered at any cost.

The Blockchain is resistant to manipulation and offers a highly secure ecosystem to developers. The DNS entries can be stored by the App developers and owners ensuring more controlled operations of App. Not even government bodies or hackers can manipulate any kind of data entry in Blockchain powered Apps.

No need of Passwords

Although passwords have been serving the purpose right by securing the Apps, they are prone to severe consequences of being forgotten or leaked. Mobile Apps developed on Blockchain need no complex passwords and the good news is they do not need passwords at all. Using SSL certificated the payment transactions can be authenticated.

The network on which the App runs is capable enough to eliminate the fake transactions. Despite being accessible to the entire ecosystem, the Apps would need no passwords to stay secure.

Developed on the Blockchain, these Apps offer Apps users an anonymity advantage. Whether it is a gaming App or any financial App, the user can stay anonymous thus reducing the exposure to problems of identity stealing and more. With complex cryptography encryption, the App users will feel safe encouraging more App downloads.

Wrapping it up: What to Expect about Blockchain when you are in the Mobile Development Industry?

Using Blockchain for Mobile App development is for a benefit for the community. Developers will have access to existing code that will lower development costs and efforts too. Open to explore newer possibilities, the Mobile App Development fraternity is all set to offer enhanced security to the users. Using the Blockchain technology wisely, developers can develop highly futuristic and challenging Apps that will create a mark in the history of App development.

Blockchain has been used to make peer-to-peer payments, that is, a promise of high-end security. Maintaining a highly optimistic vision the developers are all set to transform the App Development landscape. Offering an unalterable digital database to its users is a very big advantage that will say goodbye to the App hacks and security issues forever.