App release notes are not as trivial as you think: A guide on how to write them perfectly

Any developer will tell you that release notes are the way to introduce an app, an update or any sort of change in the app to its users. The release note is what appears in the app store, as the description of the app release. So, this little piece of copy which is not part of the user’s manual, is in fact quite important to the success of the app. Acquiring more active and happy users is an easy task. One way to achieve this is - through the app release note.

First, let’s pop some of those tiresome myth bubbles floating around, that way you’re on your way to marketing your app the right way.

Myth #1 Why bother writing a good release note? Not many people read them anyway…

Traditionally release notes were rarely read. The readership merely consisted of tech geeks such as IT managers, other app developers etc. But today, a release note is potentially read by just about anyone who’s looking for an app with similar functionality. That means your release note is very much, your ticket into thousands of downloads, more than an app without a good release note.

Myth #2 My app’s been updated. It’s better than before. That’s enough information for anyone looking to download it.

Speaking of increasing the number of downloads, never underestimate the power of a delighted customer. Anytime a customer’s feedback has been addressed, and he finds that his suggestions have been implemented, you have a strong ally on your side. Your happy customer is more than likely to begin acting as an informal advertising agent via word of mouth, to just about anyone in his or her circle of influence.

This means that if your release note is written well, you’ll have many more customers queuing up to download it. Conversely, if your app release note just says its an updated version, it’s much more likely to be overlooked, even by existing users.

Myth #3 Release notes are difficult to write. They also cost a lot of money and time.

On the contrary, think about explaining the app and its new functionalities to someone who’s never heard of it before, in such a way that they buy into it immediately – that’s precisely what you’ll need to write in a release note.

Notes are certainly not rocket science! So you needn’t even hire a copywriter to come up with a good copy. Furthermore, adding release notes on an app store doesn’t cost anything, so you can add a note every time an update is made for free.

As a seasoned copywriter, I’ve come by scores of vague release notes that cause apps to fall into oblivion.Since it’s apparent that App release notes are important, it pays to know what makes a good release note. Let’s look at a few do’s and don’ts for great release notes:

Using too many technical terms often turn users off. Many find jargon unnecessary and feel that the app has not really thought of them in making the update. For Example:

This example showcases what a release note with too many technical terms looks like. Sure, it may look peachy to a techie, but there seems to be a rather gaping disconnect between non-technical folks and the app developer.

Additionally, avoid using generalizations which end up being so general that no one knows what improvement has been made to the app: such as:

“Bug Fixes” or “To make our app better for you, we bring updates to the App Store every 2 weeks…Every update of our Facebook app includes improvements for speed and reliability. As other new features become available, we’ll highlight those for you in the app.”

Placing generalized statements in the release note is a sure way to turn potential customers away. A generalized statement is okay for a social media giant like Facebook, but it’s certainly not appealing for a lesser known app. Too much jargon and/or generalizations and your app can fall faster than you can count to ten.

Informative but to the point:

App release notes are meant to convey information about your improved app. So ensure that your note has easy to read and has understandable information about your app update. Some notes get a thumbs-down simply because they lacked basic details and some, because they go on and on about a particular update that didn’t need that much talking about. Here’s a good example of a note that’s got the right amount of information and at the same time keeps it to the point.

Connect with the audience:

Every app is designed for a specific set of people. Knowing in general the tastes of these people and talking in their language in your release notes, is an excellent way to sell your app to more and more potential users.

If your app provides a fun messaging service, then tone your release notes to reflect the same. The idea is that users will make a connect between the app and its update.

Conversely, notes lacking the element of entertainment can come off as being a boring update that’s not worth looking into. Plus, a note that goes hand in hand with the App’s brand image does well in baiting skimming users to stop and read them.

Let users know that their feedback is heard:

Release notes are a great place to let users know that their feedback is valuable and their suggestions are passed on to the engineers who work tirelessly to continuously improve the app and its functionality. A release note that contains a lineon giving credit to its engineers, especially those who have been pivotal in removing big technical hindrances, reveals the app owner’s consideration for his team and attempts to show users that the app is built for people by people.

Remember, marketing is not only about acquiring new customers – it is also about delighting existing ones so that their loyalty leads to countless new customers. A good marketer knows the value of an unconscious brand ambassador (i.e. your loyal customers often rave about great service and use). Acknowledging user feedback and behind the scenes help, both yield brand evangelists for your app. 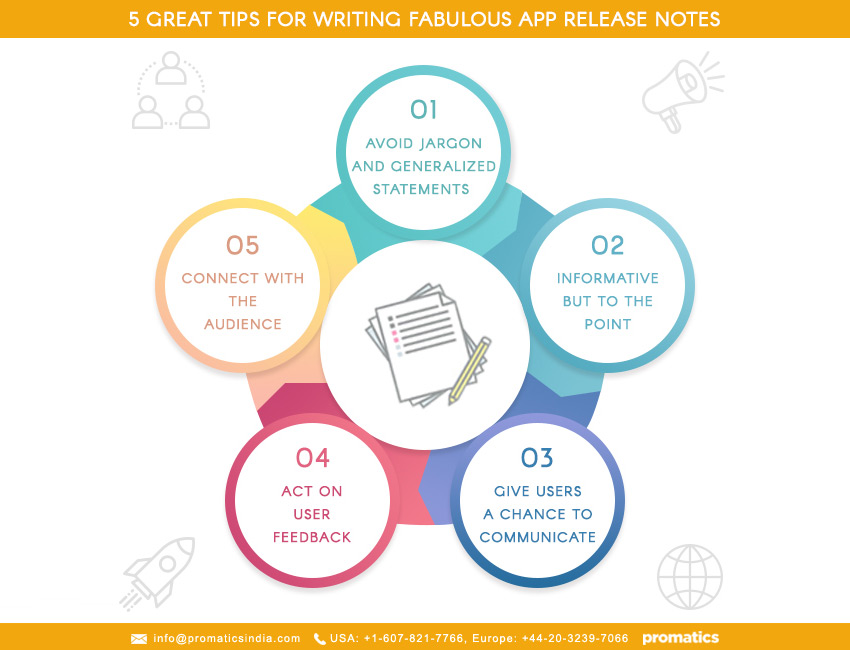 Give users a chance to communicate:

As a concluding line, provide an email address or link to your website where feedback, suggestions or queries can be quickly and directly dropped off. You’ll be surprised by the number of relevant and also vital pieces of information that come through, even without having to run a major campaign on it. Besides customers love to connect with people and not only machines/programs. Mobile App development and enhancement does not need to be a one way process at all.

Release notes are significant, even if only a few people actually read them. Their value cannot be tangibly measured, however it suffices to say that even one brand evangelist can bring in a sizeable number of new customers. Its usefulness and catchy tone determines whether the user hits the update button or not. So, how the note is written, dictates the level of distinctiveness or ambiguity of the app! Keep in mind that you’re writing for people – those in your audience will have similar interests and are likely to be drawn to certain features and certain contexts. Let existing users know that you’re listening to them and most importantly, be brief. Pack all your information and wit into a small enough package. This makes the read worthwhile and also shows that you respect users’ time.

Take advantage of these tips and get your app selling!

7 Skills You Should Look For When Hiring a Python Developer