Android 9 Pie is here. All you need to know

What is Android Pie All About?

A creative sculptural addition at the Android Lawn in California that featured “An Android robot placed near a cherry pie with a slice cut out of it” confirmed the launch of the much awaited Android Pie update by Google. Android Pie tends to adapt to your life and preferences with the help of AI through your phone usage patterns. Trying to improve the ingenious Oreo, Google designed Pie in a more lively fashion. Featuring colorful icons, new features, upgraded animations and rounded corners, Android Pie is keeping all the promises it makes and more. Here is a quick glance at its main features:

In an attempt to completely revamp the way Android used to work, Google has introduced gesture-based navigation for its users. A single home button will now allow users to navigate through phone’s features. Developers have improved the volume functions and worked on a rotation button to appear on the nav-bar to adjust screen orientation, whenever necessary. Apps are all arranged horizontally and require swiping to right or left rather than scrolling up and down. All the app windows are also significantly larger than before. There is a search bar for looking into things on the phone and the web. 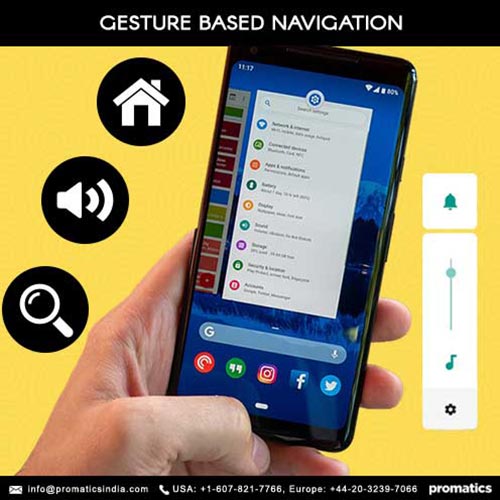 The feature is an attempt to reduce the number of times a user has to manually adjust display brightness through the use of AI to understand the user’s preferences.

AI helps Pie predict which apps you will use in the next few hours based on your previous usage patterns. Your phone only spends battery power on the apps you care about. The Adaptive Battery feature can lower CPU usage by as much as 30%.

This particular feature anticipates what a user intends to do with an app before he/she actually does it and gives the user recommends and shortcuts for doing so within the app drawer, Assistant, and more.

Taking into account how most users feel tethered to their mobile phones, Google has improved its features to help you disengage with your phone. The Digital Wellbeing is an initiative from Google to help track your phone usage. The feature keeps you informed of how much time you spend on your phone, through visual graphs and pie charts. Android P also lets users set time limits on apps and encourages them to do something else when that time is up. Improved ‘Do Not Disturb’ feature can now silence the notification sounds as well as the visual interruptions, with the only exception being calls from starred contacts. Turning the phone upside down will automatically activate this DND mode. There is a new ‘Wind Down Mode’ which lets the user tell the Google Assistant their bedtime. D-W feature is available in beta version only for now. 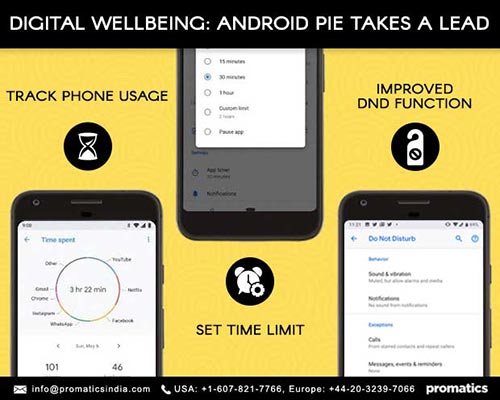 The Slice feature is designed to show relevant information from your favourite apps when you need it. It will display slices of an app within Google Search when you are looking for related information.

Android Pie has kicked in a brand new security model for biometrics. Google has a new way to verify the accuracy of biometric data, a new set of features that can use the idea to test the accuracy, a new model that splits biometric security into weak and strong, and finally a public API that developers can use to tap into this whenever they need to properly identify the user. Google introduced SAR/IAR metrics (Spoof Acceptance Rate / Imposter Acceptance Rate) that measures how an attacker can get around a properly built biometric security implementation. Thanks to the new API, developers no longer have to create their own dialogue for using biometric systems with their apps.

The release of Android 9.0 beta version on 25th July this year, gave tech-experts a chance to rally around with its revolutionary new features, before it was officially branded as Android Pie on 6th August. Here are the first impressions we gathered on Android Pie:

As soon as you will install the system update, you will notice a revamp of the home screen display. The clock is on the left of the status bar instead of the right side. At the bottom of the home screen, the square overview button has been replaced by a new icon for gesture-based multitasking. To introduce its new lateral function, Google has revamped the Home icon from a circle to a horizontal lozenge shape. There is a long bar at the bottom for swiping across applications, which is similar to Apple’s gesture interface on the iPhone X.

With Android Pie, the volume buttons always change app volume by default. There is an additional ringer icon, which can be used to instantly silence the ringer or activate vibrate-only mode, with a single tap. Keeping the phone face-down on a flat surface can silence it entirely. The user can opt for automatic rotation, but there is also an ‘orientation icon’ placed in the corner of the screen, to adjust unwanted rotation that can be irritating at times.

Android Pie offers a new magnifier, which automatically opens above the text selection tool and makes editing texts so much easy.

Pie also eases screenshot sharing with a simple squeeze of the Power button for a moment, followed by a tap at the new “Screenshot” button. A second tap on the same button allows you to share, edit or delete the image. Along with it, Google Assistant works out a “Share screenshot” link to make the sharing easy.

After one or two initial manual tweaks of brightness levels on your phone, Pie automatically adjusts the levels thanks to the AI.

There is a virtual display of how many times the phone has been unlocked in a day, how much time is spent on certain apps, the number of notifications received etc. It also allows you to set time limits on your usage of particular apps.

To enter split-screen multitasking, users need to first tap on the app icon and then click on Split Screen, however; the process is a bit slower than previous versions.

To get rid of an app, you need to go to the overview screen and swipe up the app icon you want to be removed, as it appears on the elliptical. It would not be wrong to say that some of the features have left even iPhone app developers wide eyed.

Some Navigation Lessons for A Newbie Using Android Pie

Lesson I: Google has revamped the Home icon from a circle to a horizontal lozenge shape, to introduce its new lateral function. Swipe the button and what appears on screen is the multitasking menu, press it down to bring up the Google Assistant. Users can swipe the home button twice to bring up the entire app list and the same will work on any screen.

Lesson II: A user who needs to switch to the last-used app, can simply drag the Home icon to the right edge of the screen. If the app that pops up isn’t the one you were looking to open, you can keep your finger pinned down to select through the range of other apps that are open.

Lesson III: While it is possible to swipe right or left across applications, you cannot swipe to go back to a screen. You need to click a thin back button next to the pill-shaped home button to go back to the screen.

Lesson IV: On the home screen, you must be careful as not to drag your finger more than halfway up the display, as this can open the app drawer.

Lesson V: Gestures like swipe up and long swipe up bear different results with Pie.

All new Interface tweaks of the Pie can seem irritating at first because it is an attempt to break navigation and phone use habits that you have developed over the years. Attempts to open the multitasking interface can result in mistakingly opening the app drawer. However, it is a matter of only a few days of getting used to, when you will finally be able to notice the breeze that Android Pie actually is. It is evident that the developers have taken immense measures to ease the pressure points to make the phone user experience effortless as it can be. A professional android app development company like Promatics Technologies looks forward to exploit all new options available to churn out better than before android apps.

Application designs in vogue
How to Protect Your Mobile App from Negative Reviews?