Everyone knows the most famous app stores: Google Play Store and Apple Store. But, are there any alternatives out there? Of course!

If you wonder why getting apps outside Google Play or Apple Store, the answer is that third-party market provides low cost applications, free deals, country-specific programs and curated lists so you can more easily find the app that suits your needs. It’s normal that most of the users prefer to use Google Play or the Apple Store, because it’s simpler to stick to the app store included with their devices. However, alternative app stores let developers also targeting of national audiences, specially in countries like China. 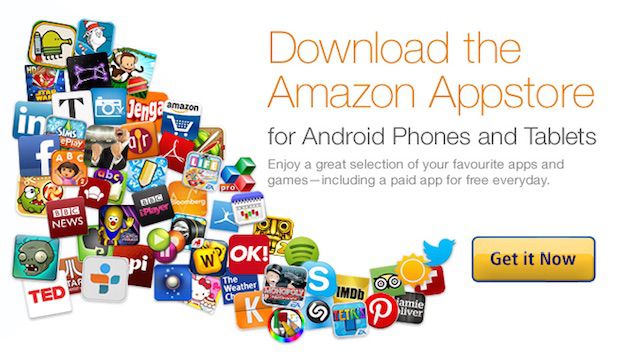 Every Android device comes with Google Play Store included, but that isn’t the only app store you can use on that OS. A common disadvantage about alternative app stores is they all offer less apps than Google Play (which has over 700,000 Android apps). So you’ll always find a bigger selection to choose from on Google Play, but there may be specific facts about the other app stores that satisfy your needs.

One of the best options and the main competitor to Google Play is the Amazon Appstore. The Amazon Appstore isn’t just a third-party app store for Android devices, but also the place to get apps for Amazon’s KindleFire tablets. The Amazon Appstore is now available in nearly 200 countries and must be installed from Amazon’s website. The store doesn’t really offer any exclusive apps, but one of its most appealing points is that it offers a free app of the day every day. This way, you can test the app and just buy it later if you liked it.

On the other hand, we find that Google Play offers recommended apps based on the apps you’ve used, while Amazon doesn’t. Also, Google Play’s interface is better for browsing and discovering new apps. Finally, if you choose the Amazon Appstore, you’ll have to install it on each new Android device, sign in, and install your apps.

Besides the popular Amazon Appstore, we can find multiple alternative app stores. These are some of the best ones:

1. SlideMe is an alternative Android app market that offers free and paid apps. They are ranked second to Google Play when speaking in terms of global reach for Android apps. A great point about SlideMe is that each app is reviewed to ensure they meet the standards of the store. Although this has its bad side too: as every app has to be reviewed, it takes some time to have them published. SlideMe offers a free developer service to anyone who creates an account. Since every app published on the store is with flexible payment options and global availability, SlideMe has been rising to the top as one of the best alternative to Google Play store. To guarantee safety, all apps are scanned by Bluebox Security before being reviewed and approved.

2. Appszoom is an application store for both Android and iOS. It offers a wide range of services such as promotional and distribution tools. Thousands of apps and games are reviewed every year by the editorial team to guarantee they meet the quality standards, which made them win the “Best Mobile App Review Site” award. A developer’s app can be reviewed by a member of the team and if it’s acclaimed, the app will be downloaded four times more than one without a review and it will be featured in an exclusive “latest reviews” section. There is also an app analysis section for developers which recommends what needs to be improved on your app.

Appszoom’s main problems are that it mainly just forwards the user to the Google Play Store to download the app, and that some apps are in fact undownloadable.

3. GetJar is a free alternative app store for Android, BlackBerry, Java, Symbian and Windows Mobile. Alongside Amazon Appstore, it’s considered one of the largest alternative app stores. GetJar uses a customer loyalty program that rewards its users with virtual currency, which can afterwards be spent in app purchases or premium apps in a wide variety of stores including Google Play. GetJar offers developers tools to grow their user-base, sell more apps and sell more in app purchases on their store. Users can submit apps through a dedicated Submission Queue section of their forum. GetJar is the most developer-populated market, housing more than 5 million program developers.

4. The Aptoide app store includes "Trusted Stamps", which certify an app is trusted and doesn’t contain any virus or malware. It differs from many of the alternative Android app stores because any user can also create their own store within its marketplace. It offers a free Certified Publishers Program, and once a developer is certified, they are entitled to certain benefits such as being marked as a trusted developer to users by a visible stamp and having access to a larger userbase. A certified developer also has priority in Aptoide’s search results.

5. Mobango is an alternative market that mostly features Android and Java, but also others such as Windows Mobile, Symbian and BlackBerry with a limited selection of apps. Users can send apps to their device through SMS or e-mail, and it’s free for developers to publish apps. The store lets users create and share a wide variety of mobile content. Developers can publish their mobile apps and games for free by registering. Mobango is positioned as the largest mobile web community in the world, with the number of developers increasing.

6. AppBrain installs apps directly to the user’s device. A big advantage for AppBrain is that it’s available to users and developers in all countries and territories, something that not even the Google Play Store does. The store provides its own SDK tool (AppLift) which gives developers the option to monetize their apps. AppBrain is considered as one of the leading ways to discover Android apps.

7. To no surprise, being the current leader in the smartphone industry, Samsung has their own app store: Samsung GALAXY Apps. Samsung GALAXY Apps is an app store for Android devices marketed towards Samsung's GALAXY phones. The mobile app is designed to look native on Android L. Samsung offers a wide range of tools and an SDK to developers for their platforms including their Samsung GALAXY devices. As usual, there are less apps here, with the majority already being on the Google Play Store as well. The main advantage of Samsung Apps Mobile is that users can assure themselves of high quality applications with no adware or malware. So if you use a Samsung device, this store may be of your interest.

8. 1Mobile is an alternative market that features only free apps. Apps for several OS exist on the website, but Android features the largest library of applications. On the pros, we can say that the store navigates very fast and offers quick downloads, and that Apps are smartly categorized in a very intuitive way, with popular apps and latest updates easy to see on the side. The main con is that every app on the store is free, which can mean that they can just be pulling apps from the Google Play Store. Also, there are links that direct to a pirate APK store, which doesn’t give much confidence in this market.

9. Russian native app store Yandex provides over 77,000 apps. Benefits of this store include automatic app updates, flexible payments and guaranteed no malware as they use Kaspersky Anti-virus protection to scan contents.

10. For those who are looking for adult contents, the best option is MiKandi. It offers a wide variety of adult contents from different channels to more than 8,000 adult-only applications.

The Google Play Store is extremely difficult to access in China, so if you target the Chinese market, there’s no choice but to use one of the 200 alternative stores that exist there.

Wandoujia is China’s leading and largest alternative app store. It offers a huge collection of Android apps, though they are not actually hosted on Wandoujia, but the store aggregates them from other sources. Developers wishing to sign up will have to visit the developer centre and once the account is approved, a developer’s APK files can be submitted to the store for review. Wandoujia states that foreign developers are a big focus of their overall vision, with existing partners such as Flipboard, Evernote Sketch, and Line proving to be highly successful for them.

Anzhi is one of the oldest Chinese Android markets and one of the most popular Android app stores in China. It often comes pre-installed on Chinese mobile devices. A common problem with this and other alternative Chinese app stores is the high number of malware apps.

AppChina is positioned as one of the rapidly growing alternative Chinese app stores fighting for first place in the ever-growing mobile apps industry. It offers the unique feature of being the only app store in China to pay back double any loss resulting from virus-infected apps to its users.