With advancements in mobile technology, smartphones and tablets are continually evolving into more functional and practical mobile devices, forming an integral part of our daily lives. The majority of the mobile software market is held by Google’s Android platform, followed by Apple’s iOS, and to a small degree, Microsoft’s Windows mobile platform. For many mobile app development companies, the crucial decision comes down to deciding on which platform they want the app to run on and work in a native environment. Unless you are a multi-skilled app developer, your coding skills are specific to one of the three.

There are advantages to each platform, with Google having the highest number of users while Apple users tend to pay more for apps. Windows users also have a sense of dedication to their brand, and that can be useful when launching an app. At some point, a mobile app development team will run into the problem of wanting to run an app on a platform it was simply not designed for. For example, a mobile app development company might launch on Android and want to expand their options to iOS later on. The benefits of going cross platform are easy to see. Having multiple platforms means that you reach a wider audience, there are more people using your app, and you make more money.

The problem is that learning a new language and API’s is tedious to say the least. What generally happens is mobile app developers farm their work out to specific platform app developers, or just stick to their own platform if they don’t have the money to pay anyone else.

The applications built with Xamarin have the same native features and share a common codebase. According to Xamarin, over 15,000 companies use their tools and rely on Xamarin for their app production. This includes some of the biggest names in the business. The Xamarin tools can be downloaded along with Visual Studio software where mobile app development firms can create iOS, Android and Windows based apps. One of the biggest advantages of using Xamarin is that most of the code is written in C#. This means that prospective mobile app developers do not need to learn Objective-C, Java or Swift to build apps if they are already familiar with C#.

HOW DOES XAMARIN WORK?

So, what exactly does Xamarin do? At its most basic level, Xamarin converts the Android and iOS SDK to C#. This allows mobile app development companies to code in a familiar language. It also gives app developers the ability to use a single language to develop multi-platform apps. This makes it far easier to work with and less syntax to remember. With the aid of Xamarin tools, a mobile app development team can access any Android or iOS API within the C# program. In terms of the user interface, nothing much has changed here. App developers need to create a separate UI for different platforms and then bind the UI to the common codebase.

What this means is that, as a mobile app developer, you can build a native application user interface as per normal. This gives you an idea of the native feel of the app, as well as the app behaviour under normal conditions. However, you can also use Xamarin to build a UI for all the various platforms at the same time. With Xamarin Forms, there is practically a 100% sharing of code between the various mobile platforms. Once the UI has been created, it can be connected to the code base in one of two ways. The Xamarin platform gives you the option of sharing the code using “shared Project” or by using Portable Class Libraries.

Most app developers will be intimately familiar with Visual Studio as it is a superb IDE that is used to develop Windows-based applications. Once the software is all set up, all a mobile app developer needs to do is start a new cross platform app project and let the imagination run wild. 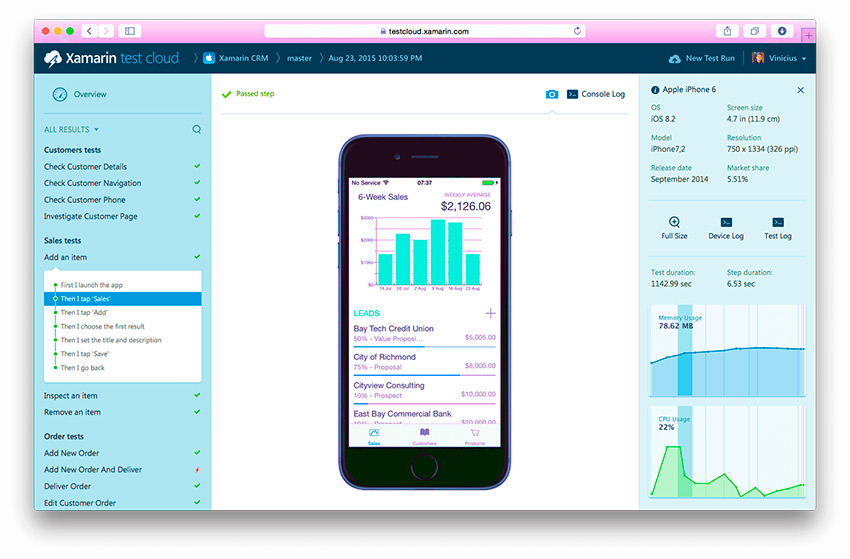 SIMPLICITY AND FUNCTIONALITY IN ONE

For anyone just getting started, going the Xamarin route is beneficial as it teaches you mobile app development for multiple platforms instead of just one. The big question is, will this process reduce native functionality? The short answer is no. Xamarin provides a great set of features in the toolset to ensure that app developers do not sacrifice any native functionality. If at any point, a mobile app development company wants to go deeper into the application, Xamarin does give you the option of bringing in code in platform-specific languages. For example, you can bring in Java for Android platforms if you are building a specific app on a singular platform.

Another great advantage of using Xamarin is that it supports wearable devices. By using Xamarin, mobile app developers can build native applications for the Apple Watch as well as Android Wear. The component store in Xamarin also lets you add more functionality to existing apps by downloading plugins. You can then use these simple plugins for a variety of different purposes like backends such as Parse or Microsoft Azure. It is also possible to download plugins for billing support and other features. Most of the downloadable plugins are cross platform, with ones available for specific platforms such as the Google Play billing support plugin for Android.

FROM CONCEPT TO MARKET

The advantages of using Xamarin can be seen across the board. When it comes to Rapid Mobile App Development (RMAD), Xamarin accelerates app production, thereby reducing costs and increasing profits for larger companies. For smaller startups, Xamarin ensures that even the smallest app development companies get their chance to show their worth. What Xamarin does is provide a faster time from concept to market for all app developers like Synergo. Since the code only has to be written once, a project can take less than half the time compared to using native programming.

Having a shorter turnaround time means less cash spent on the app development phase and a quicker movement into profits. The additional funds that result from the reduced time and manpower usage can then be allocated to other resources like additional applications or enhanced marketing material for the original app, making it far more effective from day one.

Xamarin not only reduces the time spent developing the app, but also the testing of the project itself. Since there is less code to contend with, there are far fewer bugs and issues to sort out. When errors do occur, corrections can be made through a single system with cross platform fixes. Xamarin software also includes Xamarin Insights, a software feature that keeps tabs on application crashes and exceptions. It provides mobile app development companies with real-time reports, which allows them to monitor any potential issues during initial testing or beta phases.

Flutter Vs. React Native: Who Will Win the Race?
Create project